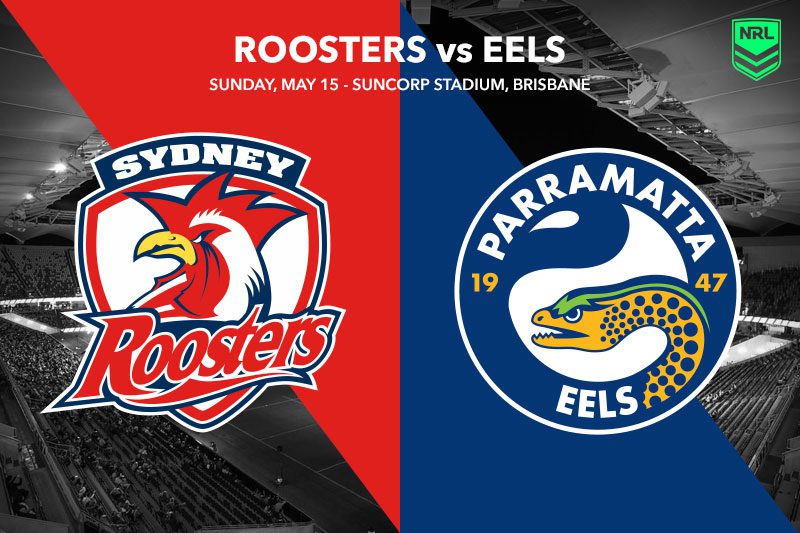 Parramatta Eels will begin favourites with bookmakers when they clash with Sydney Roosters at Suncorp Stadium on Sunday.

Both clubs have very mixed form lines coming into Magic Round and need a win for very different reasons.

In recent weeks the Roosters have lost to the Bulldogs and Dragons, before dismantling a rather poor Titans outfit.

The Eels scraped by in a close match against the defending premiers following an embarrassing defeat to the North Queensland Cowboys in Darwin.

While both clubs sit in the top eight currently, they’re both at risk of missing the top four come the business end of the NRL season and winning is important in the immediate future.

The last match between these two clubs was one way traffic, but the Eels were without Mitch Moses for the entire game, and Reagan Campbell-Gillard for a majority.

The Roosters have lost Lindsay Collins through suspension, and Sam Verrills through injury, while the Eels have named an unchanged lineup from last weekend’s win.

The Roosters have struggled for consistency and cohesion in attack and Eels coach Brad Arthur highlighted the importance of taking advantage of this.

Here are our free Roosters v Eels tips for their clash at Suncorp Stadium on Sunday.

It’s for that reason the Eels are clear on top picks here, and with wet weather around Brisbane, the value is in the 1-12 point winning margin at $2.75.

Wet weather will not only be an important factor in the margin of victory for this match, but the total points scored in it. Both these sides are capable of scoring points, but only in games where they’re expected to do so, like the Knights or Titans.

Over under betting in Roosters vs Eels NRL match

Both these sides, despite recent struggles, are still high-quality teams defensively and will be needing to build on their defense for come finals time. This will result in a low scoring game with the total points falling below 39.5.

Dylan Brown’s shift to the centres is over for the time being, as he returns to the five-eight role where he has excelled. Brown has scored four tries, assisting on another seven with four line break assists to be incredibly dangerous this season.

Lining up on a right hand side with Sam Walker, Paul Momirovski and Daniel Tupou in defense, Brown will be targeting their deficiencies and is a great value play to score at try anytime at $4.60 with online bookmakers.