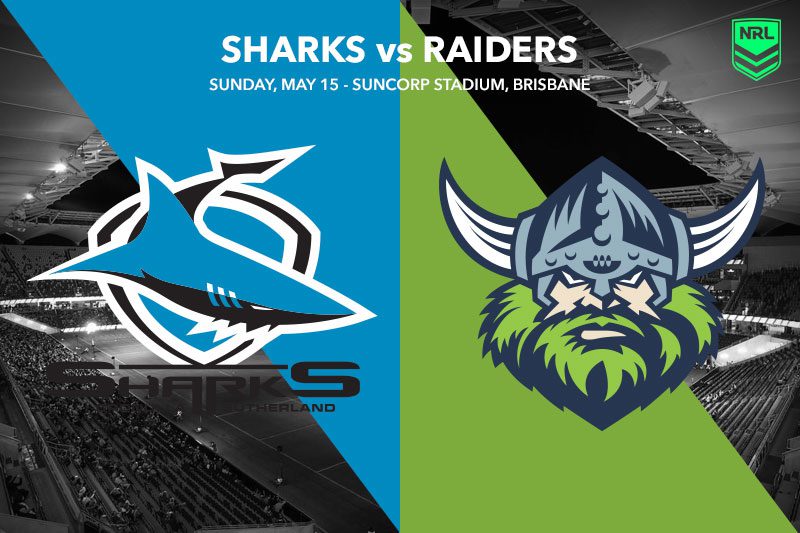 Day three of NRL Magic Round will kick off with a Round 1 rematch between the Cronulla Sharks and Canberra Raiders.

The Raiders managed to get the win to kick off the season, but a lot of water has gone under the bridge since that match at GIO Stadium.

Cronulla are fresh off engineering one of the best wins in NRL history after spending more than 60 minutes a man down as well as 10 minutes in the second half where they had just 11 players on the field.

The stirring 29-10 win has come at a cost in the short-term with both Will Kennedy and Jesse Ramien earning time on the sideline for their indiscretions against the Warriors.

As a result, Nicho Hynes has been forced into the fullback role with Brayden Trindall coming in at halfback. Connor Tracey will move into the centres in a straight swap for Ramien, who has been enjoying a fantastic season.

Despite two major absences they will come in as a $1.26 favourite with online bookmakers, and had they been playing any number of teams it could be seen as a fool’s gold price.

Such an exhausting and exhilarating performance to embarrass the Warriors with their backs against the wall could leave them with heavy legs and a touch over confident.

The Raiders have been so poor in 2022 most traders won’t even factor that into their thinking, which is an enormous indictment on them.

In the try scoring stakes, Sione Katoa is the $7 favourite to score the first of the match and Siosifa Talakai is $11.

The Sharks will look to isolate Brad Schneider and force him to make plenty of decisions when they get in to their attacking zones and it will open up space for the big man out wide to do his thing.

Canberra might have won 14-4 against the Bulldogs last week, but it did nothing in the way of proving their doubters wrong.

If anything, it confirmed everything they knew about them.

The Raiders were barely able to engineer any second half offense and only manged to score one penalty goal against a team who are certain to feature in the wooden spoon battle.

You can make that six second halves this season where they have failed to score a try, so how can any punter worth their salt even contemplate taking them in the head-to-head market? The $4 price even feels short.

Jordan Rapana is the shortest Raider in the first tryscorer market at $12.50, but Matt Timoko at $26 is well worth a look.

Connor Tracey will be marking him and he is usually a left-side player, so can he make a seamless switch to right-centre?

It’s not the battle you’d think if both these teams were at full strength, but can Canberra get into the contest early with Adam Elliott starting as their hooker?

He has showed in the last fortnight he has some utility value, and when he starts games it gives the Raiders a bigger body in the middle as opposed to Tom Starling.

Does the extra size make it harder for Cronulla to get on top early in the game and make Blayke Brailey’s life more difficult?

Brailey has taken a step forward this year in 2022, but this is an unusual match up that will force the Sharks to be patient.

Cronulla should get the win at the 1-12 margin in a patchy performance. So much effort and intensity is hard to back up in a week, as well as accommodating a major reshuffle in the playmaking spine.

Cronulla 1-12 with Nicho Hynes and Siosifa Talakai both to score tries pays $18.23.