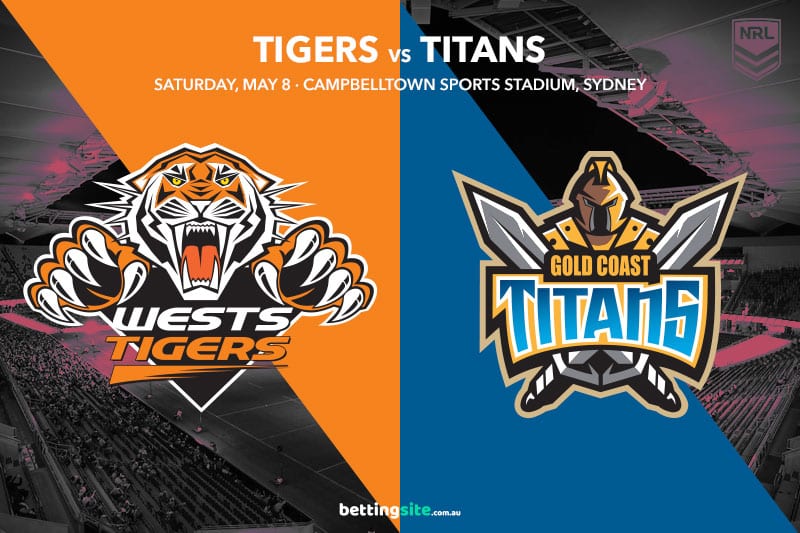 An embarrassed Gold Coast Titans will fly south in round nine to take on the Wests Tigers in a game that both sides desperately need to win if they are to make a charge towards the NRL Finals.

The Titans have lost three in a row and have given up a lot of points in the process, not least when they somehow surrendered a 22-point lead to the Broncos. The Tigers managed to secure a 16-8 upset against the Dragons, but had they not blown so many chances, they could have racked up a significant score on the Red V.

The Titans coming into this game as the favourite is one of the more baffling markets of the year. It feels as though punters and online bookmakers are taking the easy option, which is to heap misery on the Tigers, and it may come back to bite them.

The Tigers as a club never deal well with the ‘favourites’ tag, so there is plenty of like about their $2.60 head-to-head price. Most punters will be burned by their round five loss to the Cowboys as hot favourites, but this is a week where they should get back on and cheer home the upset. The Wests defence was massively improved last week and the Titans have scored six points or fewer in three of their games away from the Gold Coast this year, so you’d like to think they’ll have some belief heading into this clash. David Nofoaluma is the favourite to score first at $9.50 due in large part to his position on the right side of the field, as it was the Gold Coast’s left edge that got embarrassed last weekend against Brisbane.

Despite a poor three weeks, the Titans are still in the top eight because the teams below them can’t get their act together. This isn’t the week to be taking them at the -4.5 line, as you’ll only end up disappointed. They’ve given up scores of 36, 40 and 36 in their past three losses, and when things begin going against them, they concede far too easily. Phillip Sami at $10 shapes up as a nice first try scoring option, while Tino Fa’asuamaleaui at $26 is a good outsider to get on as he makes his return to the side.

Everyone loves to make fun of all the bad signings the Tigers have made, but one of the good ones has been Adam Doueihi. He has been the best player in both of their wins, and he shapes as the key man if the Tigers are to get the chocolates on Saturday evening. Doueihi and Daine Laurie are forming a nice combination and continued asking questions of the Dragons defence in a close game with a lot of success.

Ash Taylor on the opposite side has got to provide more for the Gold Coast Titans to be a top-eight side. He is their best creative player, but he also has to want the football when the game starts to get tough. This is going to be another difficult one for the Titans because of their abysmal record on the road in recent weeks, so Taylor can’t get away with another game where he doesn’t put his stamp on the contest.