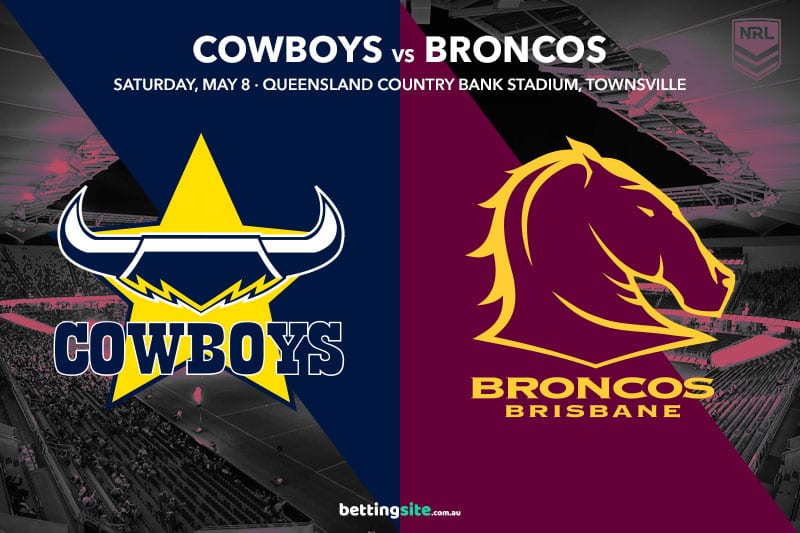 The XXXX Derby between the North Queensland Cowboys and Brisbane Broncos in Townsville on Saturday night is sure to be one of the highlights of round nine in the 2021 NRL Premiership. Brisbane sprung to life and set a club record to win last week after trailing 22-0 to the Titans, while the Cowboys gave up a 20-point head start to the Warriors and were unlucky not to run them down. Brisbane’s confidence would have received an enormous shot in the arm, and as the derby outsider at $2.50, they are shaping as a good value bet to win back-to-back games for the first time in 26 attempts. North Queensland have been forced to recall Jake Clifford at halfback due to the injury to Ben Hampton, but their last month of football where they’ve found their groove in attack is a big reason behind the $1.62 favouritism.

Reece Robson and Benjamin Condon have given punters some fantastic returns in the tryscoring stakes in recent weeks, but one North Queensland Cowboys player who should be getting more attention is Murray Taulagi. He has scored two doubles in the last four weeks, and his work out of his own end is improving by the game. He is $9 to score the first try, which is a little risky, but he is a terrific option in the anytime try markets to boost your multi.

Scott Drinkwater at $21 is a great roughie to get on in the first tryscorer market. He is almost always at the centre of any scoring plays from the Cowboys and is leading the league for line engagements, which opens the field up for those around him on the left edge, hence why Ben Condon has been terrific value in the last month.

Xavier Coates at $9.50 to score the first try of the derby is all the action we want. He could shorten even further the longer the week goes, so it might be wise to get on ASAP. Jamayne Isaako at $17 is another good option for the Brisbane Broncos in that market as his excellent form continues, and the $3 for a try at any time is also a worthy investment.

These games have been traditionally close, which brings in the +5.5 line for those who don’t quite believe in the Cowboys. The last four games at Queensland Country Bank Stadium have gone over the total points line, and fresh off the Broncos scoring 36 points, you had better believe that line will be breached for a fifth consecutive game.

Payne Haas is one of the greatest forwards ever seen at his age and is easily the Broncos’ most consistent in the engine room, so it leaves a big challenge for Jason Taumalolo. The Tongan superstar had a nice return last week with 13 strong carries, but for the Cowboys to get on the front foot, he is going to have to get at least 20 runs to compensate for the low production from Coen Hess. The Cowboys got great contributions from their bench middles last week, but to match the firepower of Haas, Matt Lodge and Tevita Pangai Jr, they need to start the game stronger, and Taumalolo shapes as the key cog.

Best bets for Cowboys vs Broncos