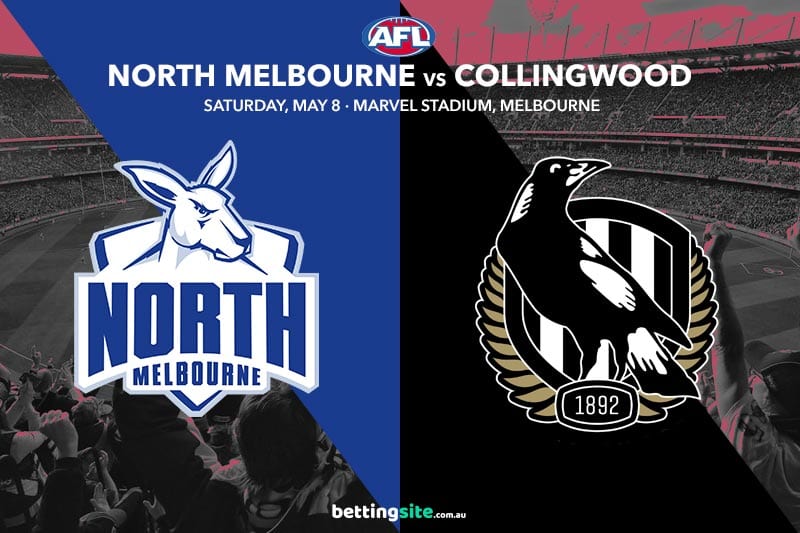 The bottom two teams on the 2021 AFL Premiership ladder go head-to-head as the winless North Melbourne take on the under-siege Collingwood at Marvel Stadium on Saturday afternoon.

North Melbourne put in a much-improved effort against Melbourne for two-and-a-half quarters last weekend, and if they bring that first-half form to Marvel Stadium on Saturday against the Pies, it will take them a long way to claiming their first win of the year.

Nathan Buckley and his Magpies come to Docklands on the back of five straight losses, including a dismal performance against the Suns last weekend at the MCG. North Melbourne may be winless, but the Pies will need their top-class mids to give them the upper hand early on; otherwise it will be an uphill battle for the biggest club in the land.

Online bookmakers have North Melbourne as outsiders at $3.85, whilst the team who has only won one more game then them in Collingwood are $1.34 favourites.

North Melbourne have lost their last 15 matches, while Collingwood have gone down in their last five, so this clearly is going to be one for the highlight reels… or not. North put in a big effort against the undefeated Melbourne last weekend and at half-time looked set to cause the biggest upset of the year. If they can sustain that level of footy over four quarters this weekend, the Roos will be in with a chance.

Collingwood’s senior players have had the spotlight firmly on them this week following their loss against the Suns, with the ‘side by side’ mantra seemingly out the window. If the Pies do not get the better of North Melbourne on Saturday afternoon, then it looks to be curtains for Nathan Buckley as the senior coach.

This match is going to be decided by midfield output, and it starts with the A-grade ruckmen on display. In recent weeks Brodie Grundy has been spending more time in the forward line, but the Magpies mids have been less effective in that time. It is all about finding the happy medium, and on Saturday the Pies will need Grundy to be at his best against Todd Goldstein. Goldy consistently gets his hands on the ball first in ruck contests, averaging just a tick over 24 hitouts a week. Whoever ends up coming out on top on Saturday will play a big part in their team’s pursuit of the four points.

With an almost four-goal head start, North Melbourne at the +23.5 line looks to be the best play in this matchup on Saturday afternoon. Both teams are languishing at the bottom of the ladder, and if they each bring the same effort as they did last week, North will cover this line with no issue. Collingwood are in disarray at the moment, and if any team this year was going to drop points against North, then it looks set to be the Pies. In saying that, it will be close all day and we expect the Pies to walk away with the four points, but the Roos should keep it within four goals.

Jordan De Goey has just seven goals to his name so far in the 2021 season, having only kicked three or more goals in a game on one occasion. We expect De Goey to bounce back from the criticism heading his way over the past week by hitting the scoreboard with great effect on Saturday. AFL bookies are paying close to $3 for the Pies enigma to kick three against a North Melbourne defence known to let opposition players kick bags.

It is far from the match of the round, but the implications are massive no matter the result. This looks set to be a back-and-forth contest all afternoon, but we expect Collingwood’s top talent to be too strong for this North side in a substantial rebuild. Expect the likes of De Goey, Sidebottom and Grundy to put the outside noise to bed with big performances as the Pies snap a winless streak not seen since 2005.