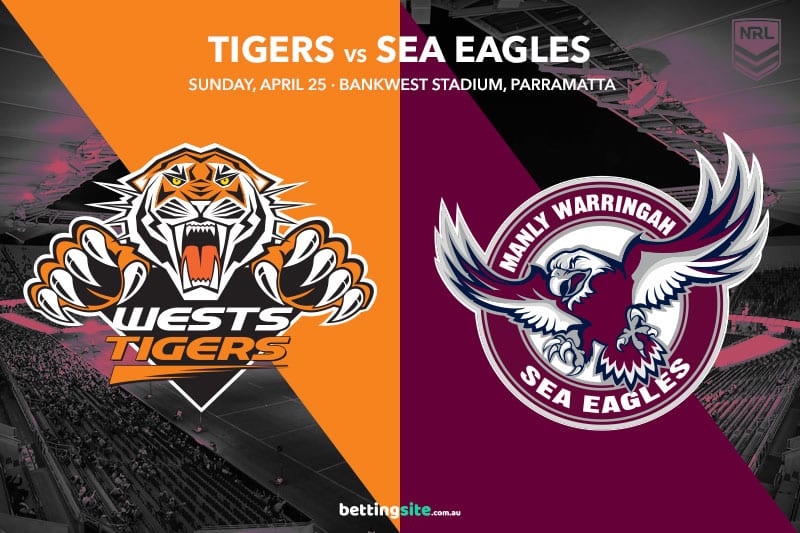 The Wests Tigers and Manly-Warringah Sea Eagles will kick off what is set to be a sensational afternoon of ANZAC Day football in round seven of the 2021 NRL Premiership, with both teams desperate to get the two points and move a step closer towards the top eight.

Three weeks ago, no one could have predicted Manly would be going for their third win a row, such was their horror form line, but with an injection of Tom Trbojevic, they have rocketed into favouritism this weekend at $1.54 with NRL bookmakers.

The Tigers put forward a stoic effort against the Rabbitohs and fell short in the cruelest of circumstances, so the $2.75 price might offer some value for punters who think they can replicate what was a terrific defensive performance.

Wests well and truly defied expectations last week by pushing South Sydney all the way, and the line has shifted all the way in to just +5.5 for the Tigers this week. There was more than enough on display last week to suggest they’re capable of getting into the grind, but under Michael Maguire they’ve struggled to put in their best efforts over consecutive weeks.

Daine Laurie at $15 shapes as a nice first tryscorer option, while Adam Doueihi at $26 is terrific value given his current form. Luciano Leilua at $4.50 to score at anytime will be one punters jump all over, but don’t forget to put Jake Simpkin in any multis at $6 following his terrific debut last week.

Forgive us for sounding like a broken record, but just get Tom Trbojevic in your multis. Now you’ve done that, take the Manly Sea Eagles at the 1-12 margin for $3.10 and we think you’ll kick off your Sunday afternoon in sensational style.

For the first month of the competition, all of Manly’s edge players were hard to back in the tryscorer markets because they didn’t have a quality creative player to get them into space, but the likes of Brad Parker, Reuben Garrick and Jason Saab hold a lot more appeal now thanks to the return of Trbojevic at fullback.

Also, do we remember Josh Aloiai’s ugly departure from the Wests Tigers? The $6.50 for him to come off the bench and crash over for a try is worth a small wager. How often have we seen players score against their former club, much to the ire of the fan base?

The fullback battle between Daine Laurie and Tom Trbojevic is where all our eyes should be firmly planted in this contest. It took just minutes last week to see just how influential Tommy Turbo is to everything the Sea Eagles do, while Laurie has been one of the shining lights of the competition and arguably the Tigers’ best player this season.

Manly created havoc down the edges last week with the elite catch-and-pass skills of Trbojevic on full display, while Laurie has been terrific on kick returns and support play. If the game is a close one, these two will have a huge say in who gets over the line. Both should get Dally M Medal points if the margin is narrow.

Manly won’t win 36-0 like last week, but the 1-12 margin for the Sea Eagles looks the way to go for this game. With Tom Trbojevic back, life is a lot easier for everyone else on the field.

Tom Trbojevic and Brad Parker to score tries and the Sea Eagles at the 1-12 margin gets you a nice $16.25 price.