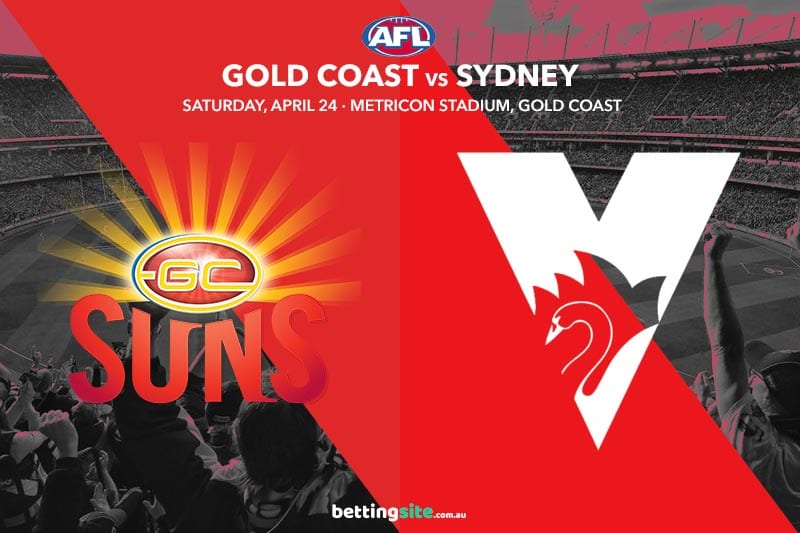 Can the Gold Coast Suns get their second win of the 2021 AFL Premiership season when they face the Sydney Swans at Metricon Stadium this Saturday?

The Suns have lost three straight matches since their captain and first-choice ruckman Jarrod Witts went down with a torn ACL, although the Swans will also be missing some key figures this weekend.

Tom Hickey has been a revelation in the ruck for Sydney this season, but he was subbed out with a knee injury last round and will be sidelined for up to eight weeks.

Lance Franklin was best on ground for Sydney last Saturday with five goals in the loss to GWS, but the champion forward will now miss up to four weeks with a knee complaint.

The Suns suffered no new injuries last week in their loss to the Western Bulldogs, while Charlie Ballard and Sean Lemmens are fit to return should Stuart Dew and his match committee elect to make a change.

Hayden McLean and Callum Sinclair should fill the void left the injuries to Lance Franklin and Tom Hickey. McLean kicked one goal against Richmond earlier this season and will be a sneaky option to hit the scoreboard this weekend.

After four weeks on the sidelines with a knee issue, James Rowbottom should be ready to return this week for the Swans. Rowbottom adds class and strength to the Bloods’ midfield group and looks an underrated option in the disposal markets.

The Gold Coast Suns are the no.1-ranked team in the AFL for kicks and second for marks, which will be important against the Swans this week. Sydney sits 15th in the AFL for intercepts, indicating John Longmire’s side might struggle to get the footy back once Gold Coast has possession.

The Suns back six often control the ball before going forward, allowing their attacking defenders like Jack Bowes and Jack Lukosius to collect plenty of touches. Both Suns offer great odds with online bookmakers in the disposal markets.

With 2016 All Australian defender Dane Rampe still injured for the Swans, Harry Cunningham has taken control of the opposition small forwards. This week he will match up on Izak Rankine, who kicked 2.2 against and had eight score involvements against Sydney last season in only his second senior game. The Suns need Rankine to fire up this Saturday if they want to break their three-game losing streak as $2.31 underdogs.

Even though it was only his second career game, Rankine was fantastic against the Sydney Swans last season. The crafty forward has not enjoyed the best start this year, but he has still kicked five goals and five behinds. Rankine should take advantage of ideal conditions at Metricon Stadium and nail his opportunities this week.

We are backing an upset this Saturday on the Gold Coast, as we think the Suns will deliver a second consecutive loss to the Sydney Swans. The absence of Lance Franklin is an obvious blow for the Swans, but we believe Tom Hickey’s injury could have even bigger implications. The Suns can handle Callum Sinclair in the middle with their experienced midfield, who should give their forwards good inside-50 entries this week.

Izak Rankine’s elite goal sense should see the third-year player sniff out a couple of majors as the Suns get their season back on track with a win at home. Luke Parker collected a game-high 27 disposals against the Suns last season, and we expect the Sydney captain to replicate that performance on Saturday. These three legs combined will get you $9.75 odds with Sportsbet.