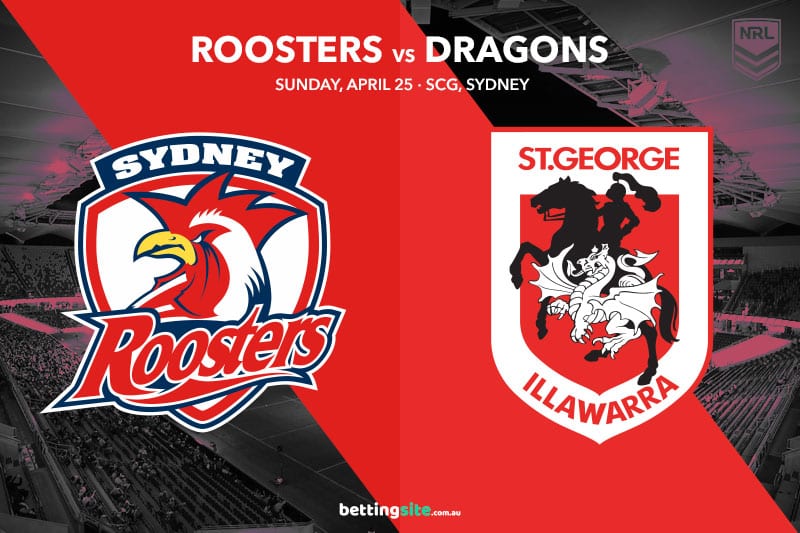 The most important NRL regular season fixture of the year takes place at the Sydney Cricket Ground as the Sydney Roosters and St George Illawarra Dragons square off on Sunday for the ANZAC Cup in the feature clash of round seven.

The Roosters will get Sam Verrills back after he missed the last 12 months with an ACL tear, while Brett Morris will take his place after missing last weekend’s match with a calf issue in the warmup.

The Dragons may get captain Ben Hunt back into their lineup, which could complete a remarkable five-week turnaround from a broken leg. Trent Merrin’s sudden retirement means Blake Lawrie will start in the front row, but otherwise the Saints remain with much the same squad that has won four of the first six games.

Brett Morris pulling out in the warmup last weekend would have left plenty of punters sad, but he will be back this weekend and everyone should be throwing some cash on BMoz to get a try against his old club. With 11 tries in five games this season, the general consensus at $1.57 is he will get the job done. He also is a huge chance to cross first down the right side at $7.50, as the Roosters will try to take some juice out of the Dragons’ potent left edge. James Tedesco at $9.50 will be the other first tryscorer the punters flock towards, but Sam Walker at $23 might be a nice outsider to get on. Many feel the upset is on for this game, but betting against the Roosters at the SCG is never wise, so look for the 1-12 margin at $3.

The St George Illawarra Dragons had played terrific football for a month and came up flat against the Warriors at home. Some fans floated the theory that they may have had an eye on this fixture, so if that was the case, the $3.75 for the Dragons to win by 1-12 points is the bet of the round. Matt Dufty at $13 is terrific value in the first tryscorer market, and right winger Mikaele Ravalawa is at the same price. Here’s a strategy: put a few bob on both of them. Tyrell Fuimaono at $11 for a try at any time may also be worth a nibble, purely for those odds and his terrific form.

Victor Radley was exonerated at the judiciary and will take his place in the no.13 jersey, and he faces off with a bloke who isn’t a household name but is quickly cementing his spot as an NRL regular. Tyrell Fuimaono previously had stints at Penrith and South Sydney as an edge player, but he has come into his own since Anthony Griffin decided to throw him into the middle. He is the key aggressor for the Dragons, leading the line speed in the middle and throwing his weight around in contact. Radley has a reputation of being a big hitter, but he also has the subtle ball-playing skills to complement his halves. When these two come together, it won’t be for the faint hearted.

We like the Dragons to get the upset in this game despite the Roosters’ amazing record at the SCG. They will win a 20-16 style of game with Matt Dufty setting up two tries. There will be plenty of drama.

Dragons 1-12 with Mikaele Ravalawa, Brett Morris and Zac Lomax to all score at any time gives you $32.75 – incredible odds.