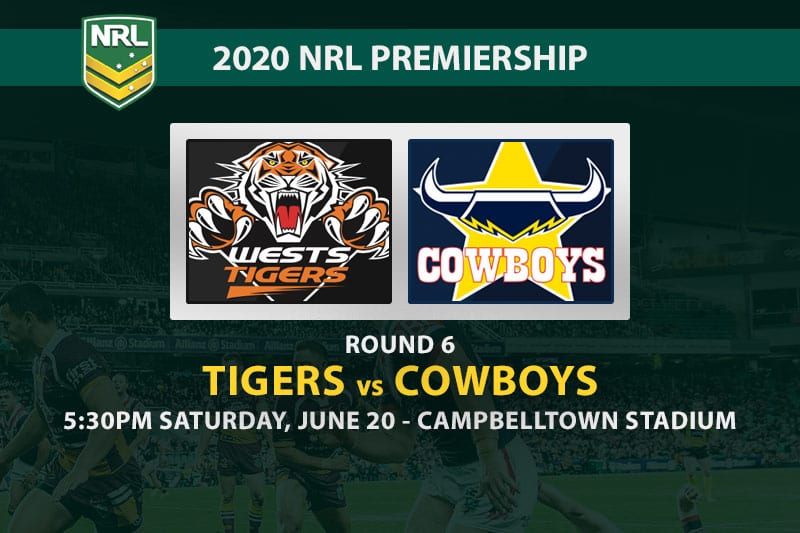 It’s a clash of eighth vs ninth, and all of a sudden there is plenty of pressure on both these clubs after consecutive losses.

When you consider it’s the second week in a row the North Queensland Cowboys are forced to fly 2,000km before spending at least another hour on a bus to get to Campbelltown, the $1.80 price for the Tigers represents fantastic value.

The big worry for the Cowboys is they will be without Valentine Holmes at fullback after he picked up an ankle injury and they’ll also have to do it without the services of Jordan McLean.

All of this mounts a huge case to throw the house on the Wests Tigers to win this game at Campbelltown Stadium, but this is where they often fall down.

In recent years, whenever the script has been written for the Tigers to win a game comfortably, they inevitably find a way to ruin it.

Just a fortnight ago, they led twice by 12 points over a Gold Coast Titans team who hadn’t won a game in 364 days.

They found a way to lose in the dying moments, and that consistency of winning when you’re expected is a huge reason they have failed to make the finals since 2011.

While they should win this game and consign the Cowboys to a third straight loss, punters should exercise huge caution and consider the Cowboys even though they are missing two of their most important players.

Hamiso Tabuai-Fidow will make his first start at fullback for North Queensland and looks a great option for anytime tryscorer, as the 18-year-old has been a prolific scorer at every level to date and starred in the NRL Nines earlier this year.

On the Tigers’ side of the equation, look at their left edge coming up against their old mate Esan Marsters, who has issues with his defensive reads, for a first tryscoring option.

Best bets for Tigers vs Cowboys