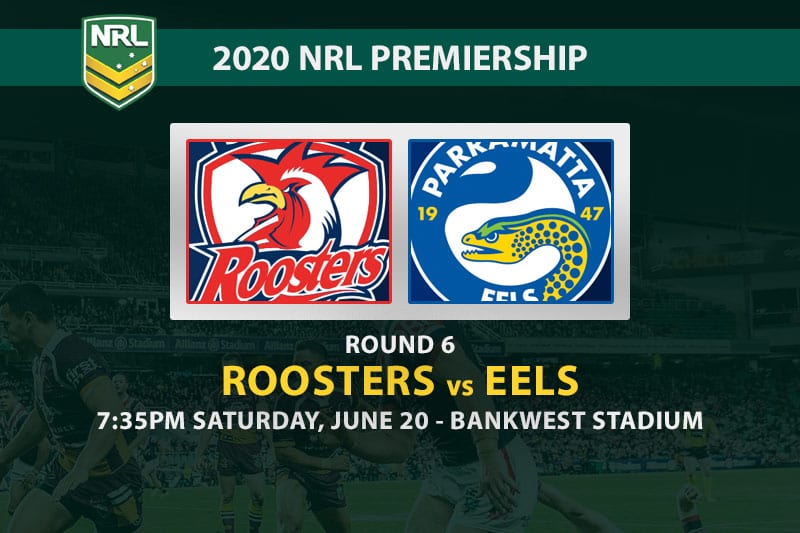 This has BLOCKBUSTER written all over it.

While it is a shame the Sydney Roosters only have a five-day turnaround to prepare for this one, the fact they were in second gear against Canterbury should mean there aren’t too many lingering effects for the Tricolours.

The Chooks also get Jared Waerea-Hargreaves back into their team after a one-game suspension, meaning their lead attack dog will be as fresh as a daisy.

While the Roosters have demolished all comers since the competition resumption, they haven’t yet faced a test like the Parramatta Eels this season.

Sydney’s $1.45 favouritism feels too short despite winning their last two games by a combined score of 101-6, as those came against a Broncos team who had excuses ready and a Bulldogs side who didn’t stand a chance.

For that reason, the line of 7.5 at $2 with BetOnline is great value for a Parramatta outfit who are yet to lose in 2020, while the $2.90 price for the win is super tempting when you consider the Eels are 12-2 at Bankwest Stadium.

Remember when people used to say wingers were guys who just hung out with real footballers? How about these superstars on the flanks for both clubs?

Brett Morris, Daniel Tupou, Blake Ferguson and Maika Sivo all present wonderful value in the first tryscorer market given their expertise in the air and how well both teams play down their edges.

It also may be worth throwing James Tedesco and Clint Gutherson in an anytime tryscorer multi, as the two fullbacks have scored six between them so far in 2020.

Parramatta currently sit at $5.50 for the premiership and if they cause the upset, you can be sure they will come into somewhere near the same price as the Roosters at $4.50.

Best bets for Roosters vs Eels