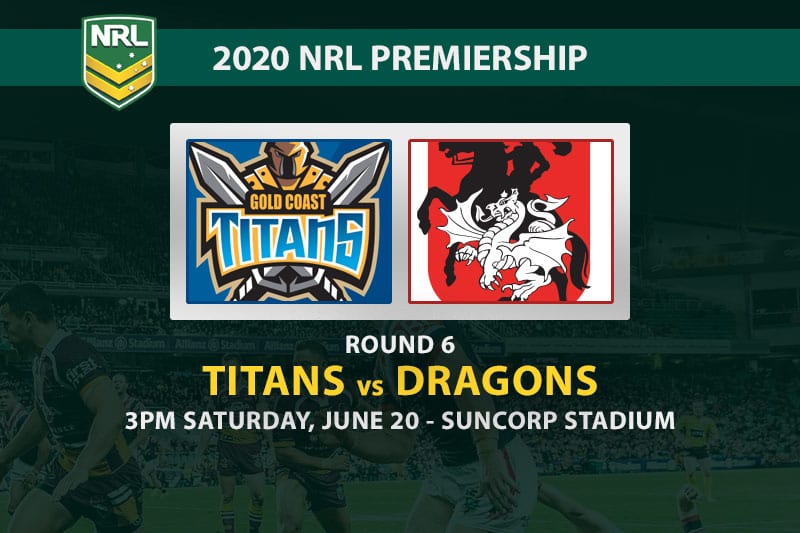 A bit like the Sharks vs Bulldogs clash, this game has big ramifications for the wooden spoon market.

The Gold Coast Titans are Sportsbet’s $2.80 favourites for least wins in the 2020 NRL season, but the Saints are close behind at $3.50 and could leap onto the top line with a loss this Saturday.

Until last weekend, the St George Illawarra Dragons had only defeated the Titans in their last 14 matches, but then they bucked the trend with a huge win over their local rivals, Cronulla.

People often believe that form is irrelevant in a local derby, so do the Red V regress to being Buckley’s chance of winning against anyone but the Titans now?

Games played between teams at the bottom of the ladder often throw out more confusion than clashes between the heavyweights, and this one appears to be in that mould.

Paul McGregor threw more darts at a board last week and found a winning formula by using Ben Hunt from the bench and starting Matt Dufty at fullback.

Dufty all of a sudden looked like he had a passing game, setting up several tries and scoring one of his own, but was there enough to believe it wasn’t an aberration?

The $1.60 favouritism suggests the punters believe the Dragons will continue their winning ways against the Titans.

Gold Coast are last-start winners at Suncorp Stadium and will feel good about their chances of causing an upset once again with the continued improvement of Ash Taylor.

His kicking down the left edge will cause big issues for Mikaele Ravalawa, who is slow to turn and chase, making Brian Kelly an attractive option for anytime tryscorer and first tryscorer.

While the form suggests Gold Coast struggle against St George Illawarra, punters should not be afraid of the $3.75 on offer for a Titans win by 1-12 points.

Best bets for Titans vs Dragons