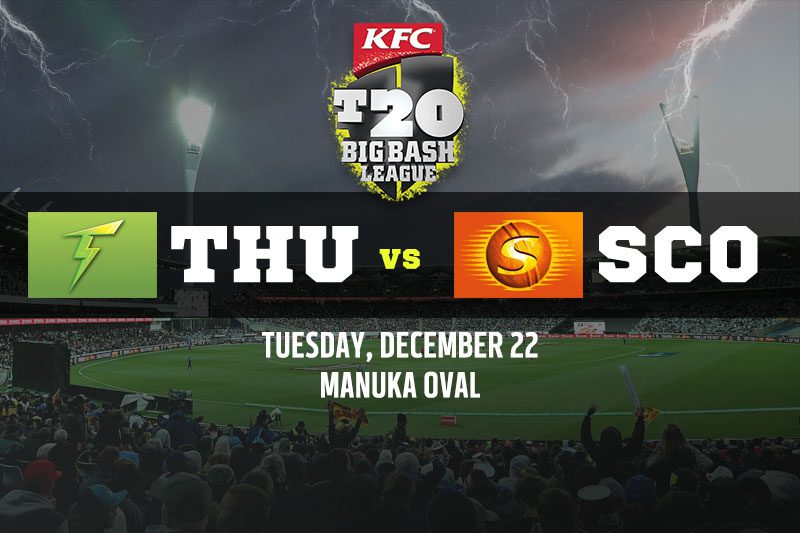 The BBL10 frenzy continues as we head to Canberra’s Manuka Oval, where the sixth-placed Sydney Thunder host the winless Perth Scorchers on Tuesday night.

The Thunder are coming off a momentum-building win against the Brisbane Heat when chasing 179 last Monday night. The Thunder found themselves in trouble at 5-80 when Daniel Sams came to the crease, but he proceeded to belt 65* from 25 balls and lead his side to a dramatic victory.

The Scorchers, on the other hand, would have been slightly frustrated as their match on Wednesday against the Melbourne Stars was abandoned due to rain. They had set a competitive total and looked well on their way to defending that, as Jhye Richardson had trapped Marcus Stoinis LBW just before the rain arrived.

With plenty to play for on Tuesday night, neither side can afford a slip up here.

Despite being winless after two games, it’s hard to imagine a quality outfit like the Scorchers going through three games without a victory. We’re backing them to overturn their poor start to BBL10 with a win over the Thunder on Tuesday night at Manuka Oval. The two teams generally match up well against one another, but we expect the Scorchers – and especially their high-class bowling attack – to get the job done.

As a pairing, Colin Munro and Josh Inglis are yet to set the competition on fire at the top of the order. However, Munro made a well-compiled 49 against the Stars last time out, and we all know what Inglis can do once he gets going. With the Scorchers predominately a bat-first team over the years, the pair will look to take away any momentum the Thunder have after their win against the Heat.

The talisman behind the Thunder’s latest win will be keen on making sure that wasn’t a one-hit wonder. The star all-rounder will most likely come in at six and will be looking to clear the ropes early on, so there is value in backing to pass 10 runs even if he only faces a few balls. And if you can find odds for him to score 20 or more runs, consider taking them.