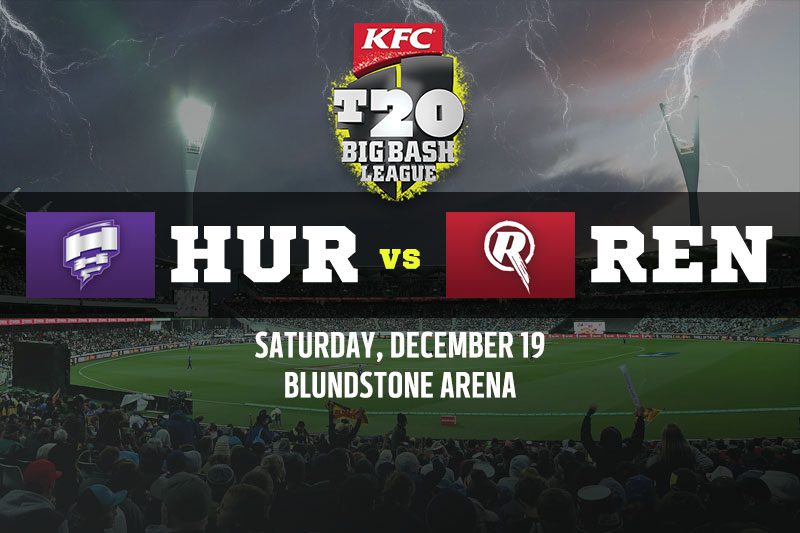 Can the Melbourne Renegades bounce back after one of the biggest losses in Big Bash League history, or will the Hobart Hurricanes continue their run of good form?

To avoid clashing with the Test series between Australia and India, this match will start early in the day at Blundstone Arena, with the first ball scheduled for 11:10am local time.

SEE ALSO: HOW TO BET ON THE BIG BASH LEAGUE

The Renegades must dig deep and find their feet after an embarrassing loss to the Sydney Sixers, but it won’t come easy without their captain, Aaron Finch, who has been granted some time off over Christmas.

To make matters worse for the ‘Gades, English star Dawid Malan – the top-ranked T20I batsman in the world – will make his long-awaited Hurricanes debut this Saturday.

Ben McDermott showed good form with a team-high 46 runs in Hobart’s recent loss to the Adelaide Strikers, but it’s his past performances against the Renegades that excite us. The keeper-batsman managed to stay alive in both matches last season, posting 51* in the first clash and 38* off 19 in the second, while back in 2016-17 he hit a memorable 51-ball century as the ‘Canes chased down 222 at the Docklands.

To take a wicket – Josh Lalor

Both Josh Lalor and Kane Richardson have taken four wickets in their first pair of games, but the odds for the former are more promising. The lefty paceman has taken 59 wickets in his 55 T20 innings, meaning he’s consistently good for at least one per match. Lalor took three wickets against the Hurricanes last season when he was at the Heat, giving us even more confidence in the 33-year-old.

Very few Big Bash players have aged as finely as James Faulkner, who seems to be swinging the ball more than ever in his later years. The experienced seamer has taken seven wickets in his first three contests this season, consistently striking gold against opening batsmen with the new ball. Remarkably, Faulkner has dismissed an opener and the first drop in all of his BBL10 matches thus far.

The inclusion of Dawid Malan spells trouble for any opposition team, especially the demoralised Melbourne Renegades. Even though Mohammed Nabi comes into the ‘Gades lineup, one suspects they will struggle without Finch leading the way. Even without Matthew Wade, the Hurricanes are loaded with big hitters and should do enough to notch a win at home.