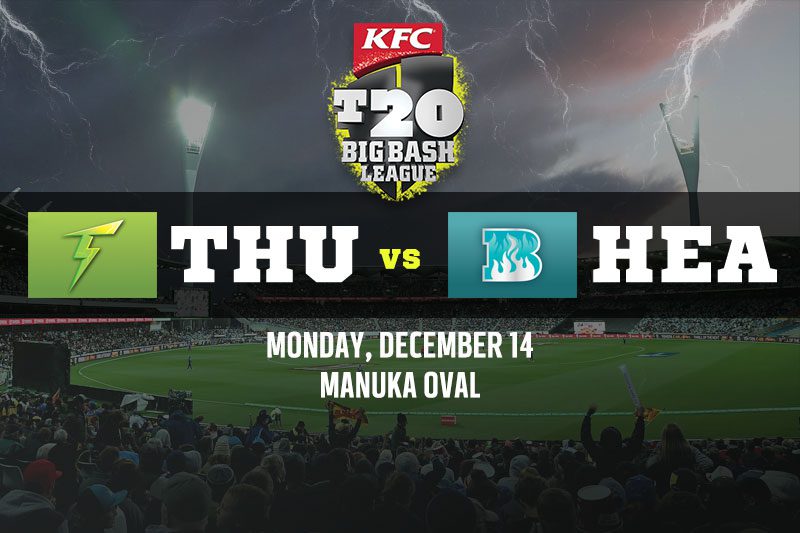 Having come off disappointing results first up in BBL10, both the Sydney Thunder and Brisbane Heat will be looking to bring up their first win of the season when they clash in Canberra on Monday night.

The Thunder seemed to have restricted the Melbourne Stars to a gettable total on Saturday afternoon, but a middle-order collapse left them needing to do too much with too little left in the sheds.

The Heat fell to the Stars as well only the day prior, posting just 125 after being asked to bat first and then failing to contain the likes of Hilton Cartwright and Glenn Maxwell.

With firepower on both sides, this is set to be a cracking contest between a couple of underdogs in BBL10.

Max Bryant and Sam Heazlett from the Heat are no doubt a couple of up-and-coming stars, but the proven duo of Alex Hales and Usman Khawaja will look to lay a better platform than what they did on Saturday afternoon against the Stars. Both of the Thunder opening batsman are classy, experienced white-ball cricketers, and with both looking to push their case for T20 World Cup selection from left field, then they may want to start stringing together some big partnerships. Monday looks to be the perfect time to do so.

‘Uzzie’ copped a bit of a rough call on Sunday afternoon when given out caught behind despite replays showing he was desperately unlucky to be sent on his way. The classy left-hander will look to bounce back off that poor start, and we’re tipping him to go big in game two of the Thunder’s BBL10 campaign.

To hit a six – Max Bryant

Sure, we’re tipping the Thunder to put on a big opening partnership, but it doesn’t mean that Max Bryant can’t launch a maximum over the ropes at Manuka Oval. It was a bit of a scratchy innings for Bryant in game one with 20 runs off 20 balls, which did include one maximum against the Melbourne Stars. We’ll be hoping he does something similar against the Thunder on Monday night.