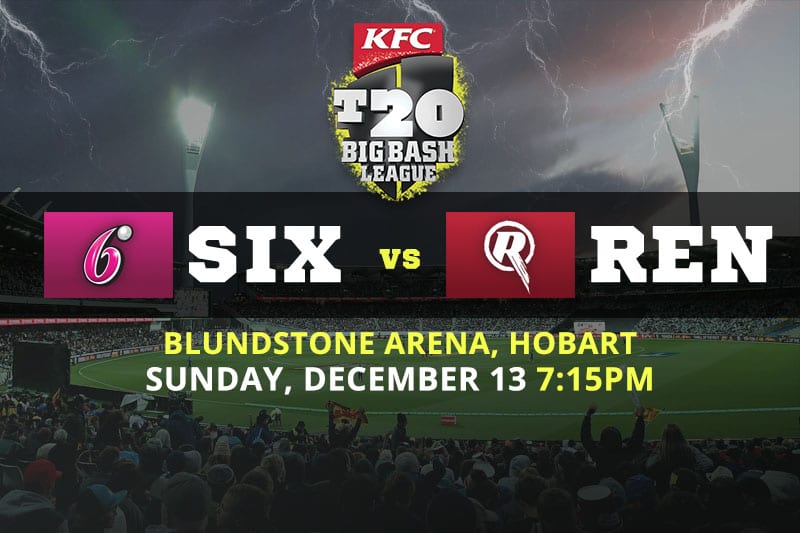 The Big Bash League rolls on as the Sydney Sixers “host” the Melbourne Renegades on Sunday night down in Hobart. The Sixers will be looking to bounce back from a disappointing batting effort on Thursday night against the Hobart Hurricanes, whilst the Renegades will be hoping to build on whatever the offer up 24 hours prior against the Perth Scorchers.

Having been dismissed early on Thursday night, the emerging keeper-batsman Josh Phillipe is one to watch on Sunday night as he looks to push his claims for higher honours in the lead up to next year’s Twenty20 world cup, and what better night to do it than in front of the Twenty20 Captain of Australia, Aaron Finch.

The first ball is set to be bowled at 7:15pm AEDT.

Will there be a more dynamic opening duo in BBL10 than Aaron Finch and Sam Harper? The pair will look to solidify an early dominance on the Sixers bowling attack which looked slightly undermanned on Thursday night, and considering the Sixers love to use their spinners in the powerplay, both of these batsmen will look to be aggressive early on. If they opt to use Dwarshius or even Brathwaite or Christian, then these two will look to take advantage of having pace on the ball to full effect.

If the opening batsman for the Renegades don’t get them off to a blistering start as we are predicting, the Renegades have the experienced duo of Shaun Marsh and more importantly Rilee Rossouw to fall back on in the middle order. Rossouw is renowned as a T20 specialist around the world and averages 29.5 with the bat in hand after playing over 200 Twenty20 matches. He managed to put up 100* in the PSL earlier in the year, and if he brings that form to BBL10 he will be hard to contain for the Sixers bowling attack.

Having come off an abnormally poor start to BBL10 the exciting wicket keeper-batsman for the SIxers will be looking to bounce back on Sunday night against the Renegades. In his brief career to date he already has 24 maximum’s to his name in Twenty20’s and he will be looking to right his wrongs from Thursday night in style.