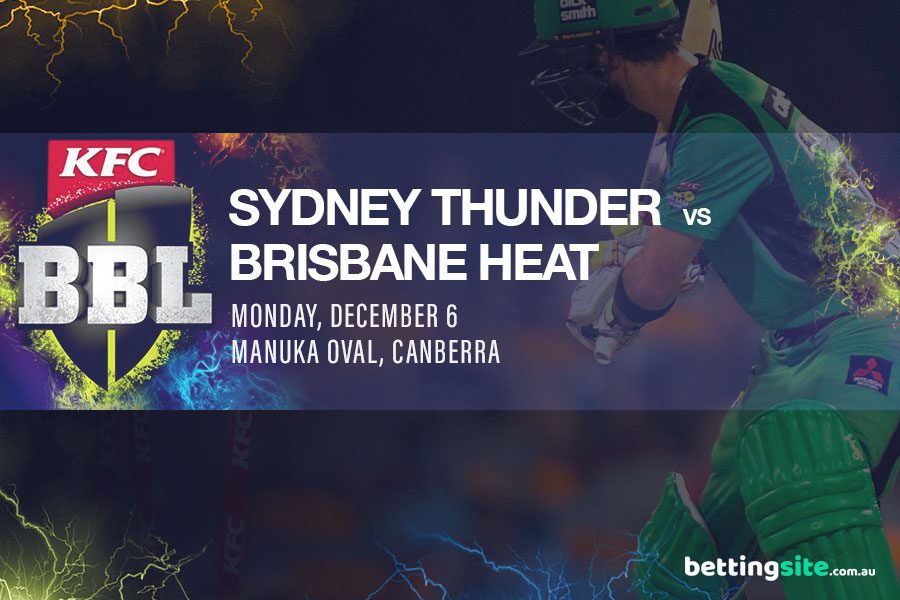 The second match of BBL11 pits the Sydney Thunder against the Brisbane Heat at Manuka Oval on Monday night.

The Thunder will be hopeful that the likes of Alex Hales, Sam Billings and company can help kickstart their season on the right note. Hales led the competition in runs scored last summer, amassing 543 runs in his 15 games for the green side of Sydney. With Billings regarded as one of the most enigmatic batsmen in the competition, the Thunder will try and fill the void Usman Khawaja (international duties) has left with their classy Englishmen, whilst Sam Whiteman will look to continue his early-season form in domestic cricket.

Emerging leg-spinner Tanveer Sangha led the Thunder last year with 21 wickets at an average of a touch over 18. With Twenty20 specialist Chris Green and Daniel Sams in their lineup, the Thunder have one of the best bowling attacks in the Big Bash League, and if their batters can play their part, then the bowlers can no doubt hold their end of the bargain.

The Brisbane Heat have regularly underperformed outside of their championship win in BBL02. However, BBL11 could be their season, especially if Chris Lynn can be at his destructive best throughout the whole campaign. Alongside the ever-improving Jimmy Pierson and Max Bryant and the experience of Tom Cooper and Jack Wildermuth, this squad could ruffle a few feathers this summer.

Afghani off-spinner Mujeeb Ur Rahman will be looking to weave his magic against a potentially fragile Thunder batting lineup, whilst the absence of Mark Steketee will be hard to cover on a pace front with the quick on Australia A duties. Steketee took 24 wickets at a tick under 22 last season and is one of the most reliable death bowlers in the Heat squad.

Chris Lynn is one of the most dynamic T20 batsmen in the world, and if he is at 100% fitness, then look out people in the stands at Manuka Oval. He scored 458 runs at an average over 35 last year, and despite the big boundaries at Canberra, no ground is big enough when ‘Lynnsanity’ is in full swing. With Marnus Labuschagne away on international duties, a bulk of the Heat’s runs will come from Lynn.

With Mitchell Swepson and Mark Steketee missing the Heat’s opening game, Brisbane will be relying on the international star Mujeeb Ur Rahman to help restrict the Thunder. In three BBL seasons to date, Mujeeb has 29 scalps at 21.24 with an outstanding economy rate of 6.13. If the Heat are to win, Mujeeb will need to play a big role.