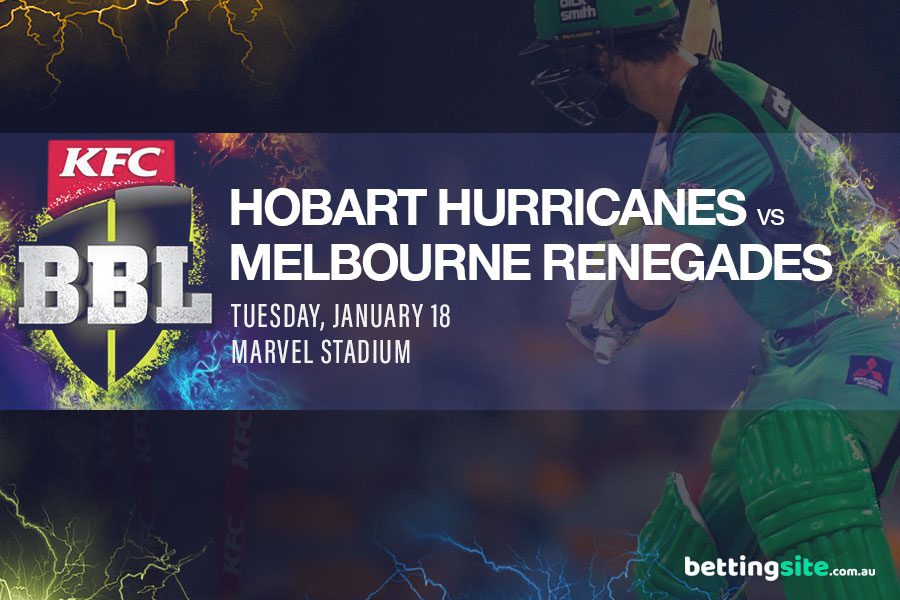 The Hobart Hurricanes can give their Big Bash League finals chances a huge boost with a win over the battling Melbourne Renegades at Marvel Stadium on Tuesday night.

If the Adelaide Strikers go down to the Sydney Sixers on Monday as expected, a victory will put the ‘Canes fourth in the standings with one game left to play.

Hobart come into the clash in reasonable touch following two wins in their last three outings, most recently edging out the Sydney Thunder thanks to big knocks from Matthew Wade (83*) and Caleb Jewell (51) along with strong bowling displays from Jordan Thompson (3/24), Riley Meredith (3/29) and Sandeep Lamichhane (2/26).

SEE ALSO: HOW TO BET ON T20 CRICKET

For the Renegades, it’s all about pride now as they head into the last two games of what has been another miserable BBL campaign.

After a brief resurgence around the turn of the year, the ‘Gades have reverted to type with three consecutive losses to keep one hand firmly on the wooden spoon.

They were utterly outclassed by the Melbourne Stars last time out, even though that side is still missing a few starters, and it will take a mighty effort for this mob to turn the tide on a Hurricanes outfit that scored 206 when they last met.

While Hobart’s spearhead has not been at his absolute best this season, he got plenty out of the Docklands pitch in the win over the Thunder last Thursday. That form looks pretty good coming into a must-win clash against the worst team in the competition.

Whereas the Renegades are limping towards to the finish line, the Hurricanes have it all to play for. If Hobart can’t win this one, then they don’t deserve to feature in the BBL finals series.