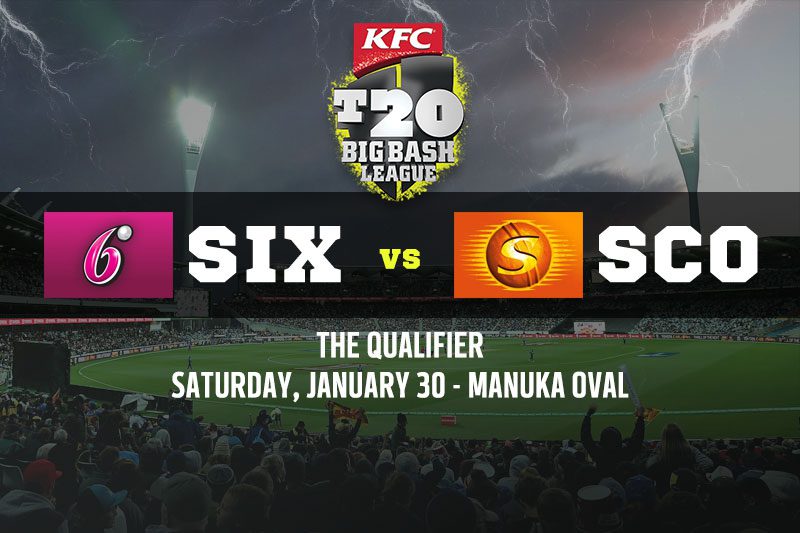 It is first versus second in the Big Bash League Finals when the Sydney Sixers host the Perth Scorchers on Saturday night in ‘The Qualifier’ at Manuka Oval. The Scorchers have opened favourites at odds of $1.80, while the top-of-the-table Sixers are outsiders with odds of $2 in BBL betting markets.

The Sydney Sixers sealed a first-place finish with a dramatic win over the Melbourne Stars, and they look set to be boosted by the return of Mitchell Starc. However, the Sydneysiders look set to lose spinner Steve O’Keefe to a calf injury he picked up in their match against the Stars. The Sixers were the best team of the competition over the entire season, but can they stop a red hot Perth Scorchers outfit?

Despite a last-over loss to the Brisbane Heat on January 26, the Perth Scorchers were easily the form team in the back half of the season. With a dynamic top order, in fact batting line up in general the Scorchers can set a big total if they bat first. On the other hand they would feel just as confident. The Scorchers arguably have the stronger bowling attack, and they would feel pretty confident in progressing through to the BBL10 Final with a win over the Sixers.

It is hard to not be impressed by the recent performances that the Perth Scorchers have put forward. With a star-studded bowling attack spearheaded by Jhye Richardson and Jason Behrendorff and aptly supported by Andrew Tye in the death overs, the Scorchers have a genuine all-round team for all situations. Jason Roy and Liam Livingstone will set the tone early with the bat, while Colin Munro, Josh Inglis and Mitch Marsh give serious firepower to the middle order. We expect them to book the first spot in the BBL10 Final.

The top of the order is clearly Liam Livingstone’s strongest position in Twenty20 cricket, and he has proved that throughout BBL10 with 289 runs in 11 innings at an average of 26.27. He has plundered 18 fours and 19 sixes this season, so if he gets to 20, he will get there in quick time. He will get no surprises from the likes of Jackson Bird, Sean Abbott and Ben Dwarshuis, and we expect him to get the Scorchers off to a flying start.

Andrew Tye has bounced back to the same form that saw him selected for the national side in the first place. Instead of trying to reinvent the wheel with every ball, he has gone back to bowling fast with a couple of change-up deliveries. He has 17 wickets in BBL10 and has taken two wickets in three of his past four innings, so he looks a good bet to finish with multiple scalps on Saturday night.