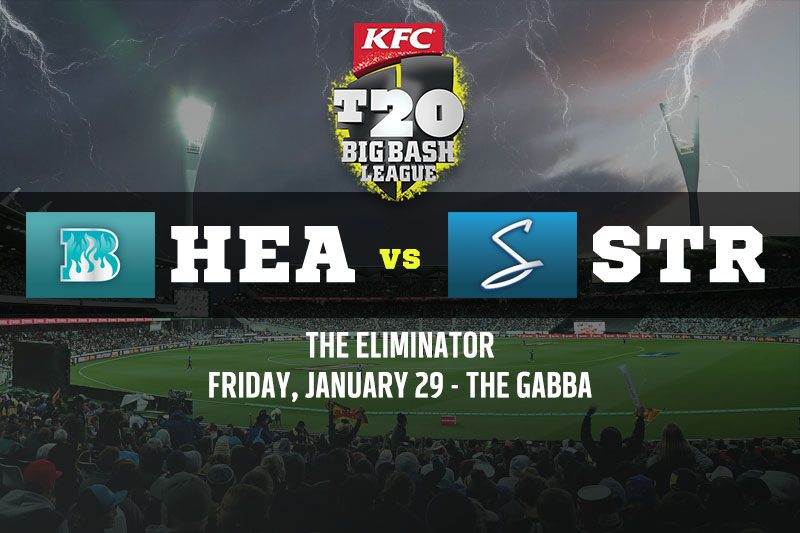 The Brisbane Heat and Adelaide Strikers will face off in BBL10’s first playoff match at The Gabba this Friday night.

Titled ‘The Eliminator’, the team that loses this match will not receive a second chance, while the winner will advance to ‘The Knockout’ against the waiting Sydney Thunder.

Finishing fourth and fifth on the ladder respectively, the Heat and Strikers must now win four consecutive matches to secure the BBL10 title, putting them in the toughest position of all the remaining teams.

Both matches between Brisbane and Adelaide this season went in favour of the Strikers, who used their well-rounded batting lineup to perfection.

The Heat enter the BBL Finals after toppling the Perth Scorchers thanks to a brilliant Marnus Labuschagne performance, while the Strikers went down to the Sydney Thunder in their last outing after a top-order capitulation.

Many online bookmakers are offering tight odds for this match, so there is a good chance this one could go down to the wire.

The Adelaide Strikers co-captain has not been at his very best since returning from the Australian Test side, but Travis Head is known for his big-game performances. The talented lefty has surpassed 25 runs in two of his three BBL10 matches and is a certified T20 weapon with the bat, leading us to believe his current odds to make 25+ are well over the mark.

To take a wicket – Marnus Labuschagne

Another returning star from Australia’s recent Test series against India, Marnus Labuschagne is usually known for his outstanding batting, but it has been his bowling that impressed us. In the three games he has played since rejoining the Heat, Marnus has taken six wickets in just eight overs and bagged three against the talented Scorchers.

Although they will be the visiting side at the Gabba, we believe the Adelaide Strikers will win this match. The SA squad beat the Heat twice during the season, including an 82-run victory only a week before the playoffs where Brisbane had a full-strength side. Alex Carey made 101 runs against the Heat in their most recent clash and could fire again this Friday night.