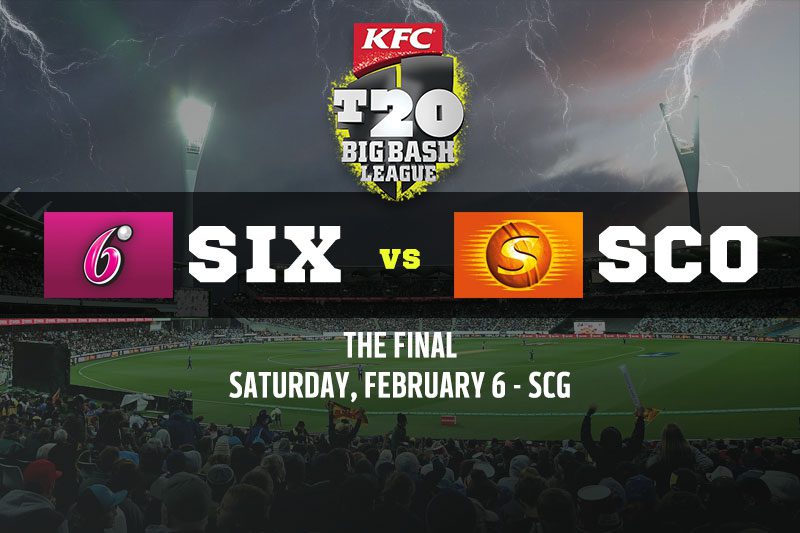 The two most successful teams in Big Bash League history will face off in the BBL Final this Saturday when the Sydney Sixers and Perth Scorchers meet at the SCG.

These two franchises are the only teams to win multiple BBL championships, with the Scorchers claiming three trophies and the Sixers saluting twice.

The Sixers earned their spot in this match after beating Perth in The Qualifier, forcing the WA squad to take on the Brisbane Heat, who they beat with relative ease days before this clash.

The Sixers have won two of their three meetings with the Scorchers this season, but Perth recorded a massive 86-run victory in the other one.

Australian Test star Mitchell Starc could have played in this match, but he was ruled out of contention due to fitness concerns and because the Sixers have faith in their current bowlers.

Last season’s BBL Final was famously rain-delayed, and there is a slight chance BBL10’s decider will be shortened due to inclement weather as well.

To hit a six – Josh Philippe

Named best on ground in his first BBL Final appearance last season, Josh Philippe has already shown an appetite for the big occasions. Opening the batting is the toughest job in cricket, but this young batsman has brilliant senses and strength to match. You know this rising star is going to swing hard at the ball, as he hit three sixes in his last championship game and at least one maximum in his last two clashes with the Scorchers.

There is more on the line for Jason Behrendorff than a BBL championship this Saturday, as the 30-year-old quick is looking to impress Australian selectors ahead of the upcoming T20 World Cup. Behrendorff has already been selected in the squad, but a strong performance this weekend could boost his chances of a starting berth for the Aussies. He was electric for the Scorchers in their last match, dismissing both Chris Lynn and Joe Denly in the same over, so the form is hard to ignore.

When the Scorchers are up and about, no team in the league can beat them. The bowling trio of Jhye Richardson, Andrew Tye and Behrendorff is world class, while Mitch Marsh and the other top-order batsmen are all dynamic players. We think the Scorchers will walk away from the SCG this Saturday with their fourth championship.