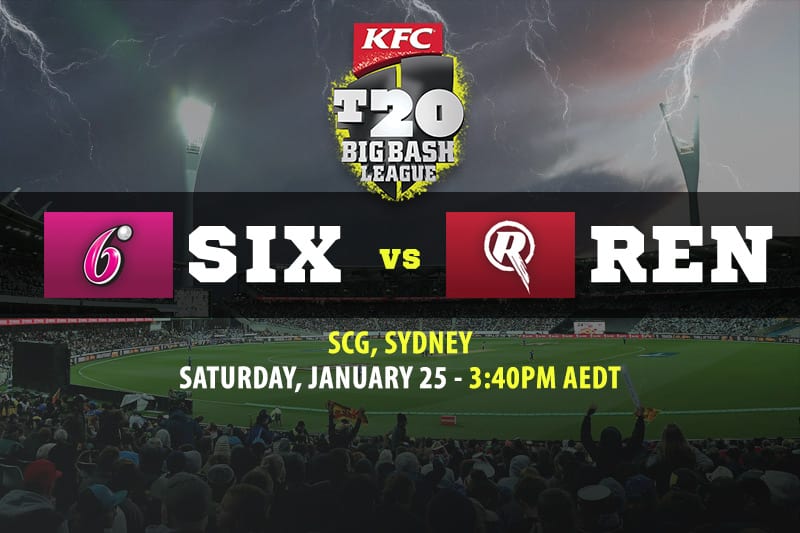 The Sydney Sixers will battle the Melbourne Renegades at the SCG in the home side’s final match of the BBL09 regular season.

This will be a perfect chance for the Sixers to lock themselves into the BBL Finals, if they have not already done so as a result of Thursday’s clash with the Brisbane Heat.

We have touched on the Melbourne Renegades and their woes many times this season, but it still surprises us that they flopped in such a major way when they won it all 12 months earlier.

With their title defence officially over, the Gades will have their work cut out against a Sixers side that features Test stars Steve Smith, Josh Hazlewood and Nathan Lyon.

Steve Smith top Sixers runscorer @ $4.50 with Sportsbet
The world’s best batsman will return to the BBL this week, and we think he will start off with a bang. Making 230 runs in his two ODI innings against India, Smith is in the best form possible heading into this match. The Renegades bowlers are not the best in the league, and Smith has had plenty of time to practice against Kane Richardson in their time together on tour.

Beau Webster top Renegades runscorer @ $5 with Sportsbet
Aaron Finch and Shaun Marsh are two BBL stars, but the bowlers for the Sixers are extremely dangerous, leading us in direction of Beau Webster. The lanky Tasmanian is a very good player in the middle order and has already made 400 runs this season, which puts him fourth in the BBL09 run charts. Webster was beaten by Lloyd Pope last time he met the Sixers, but we think he will be fine in his second attempt.

Tom Curran most Sixers wickets @ $3.75 with Sportsbet
Although he does not have the best economy rate, Tom Curran is one of the most reliable wicket-takers in the Big Bash League. He is the favourite in the market for this match, and considering he already has 17 wickets this season, the choice is not hard to make. Curran was embarrassed last time he faced the Renegades, and he will want revenge this time around.

Cameron Boyce most Renegades wickets @ $4.20 with Sportsbet
In the past few seasons, Cameron Boyce has evolved from a rank-and-file spinner into one of the best leggies in the BBL. He has take six wickets in his last two matches and claimed two scalps when the Renegades played the Sixers earlier in the season, so Boyce is a great pick for this match.

Sydney Sixers to win @ $1.72 with Sportsbet
The Sydney Sixers bring in two Australian superstars in Josh Hazlewood and Steven Smith, while Nathan Lyon is another champion with an excellent record at this level. The Renegades have only just found form in the past few days, but we don’t see them as a threat in this match.