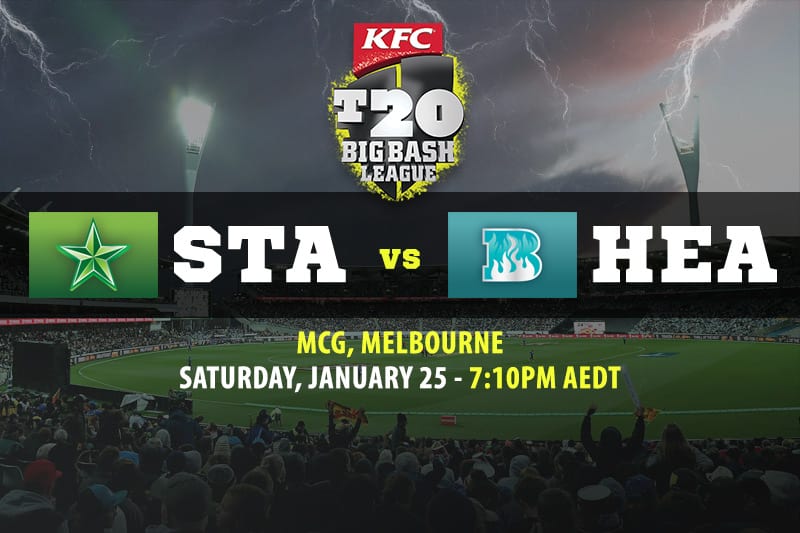 The Melbourne Stars have the best record in the Big Bash League, but the Brisbane Heat will try to close the gap on the leaders at the MCG this Saturday.

This could be an early elimination final for the Heat, who are running out of time to make their move and lock down a spot in the top five.

Only two teams have beaten the Stars this season, being the Sydney Sixers and the Adelaide Strikers, so the Brissie boys will have to bring their A-game.

Much of the focus will be on Stars opener Marcus Stoinis, who needs 48 runs to eclipse D’Arcy Short’s record of 637 in a BBL season.

Last time these teams met was early in the campaign, before the Stars went on their massive winning streak, and the Brisbane Heat were still unable to win on that occasion.

Glenn Maxwell most Stars runs
We do not think this will be a game where Marcus Stoinis dominates the batting, instead we see Maxwell coming in and making a big score. Last time these teams met, it was Maxwell who won the match for the Stars with 83 runs off 39 balls. The Heat will have a different lineup of bowlers, but we still see Maxwell making the biggest impact.

Chris Lynn most Heat runs
This is it for Chris Lynn, he cannot afford to come out and make a low score in this match. Too many times this season has Lynn been beaten before getting to 10 runs, and this is where it ends, because there is no tomorrow for the Heat. If Lynn can see through until he makes at least 20, he should go on to make upwards of 50 runs.

Adam Zampa 2+ wickets
Taking wickets has been easy for Adam Zampa at T20 level, and this season has been another positive one for the spinner. Zampa averages a wicket every three overs he bowls, and against the Brisbane Heat, who like to hit spinners, he should use his skills to beat multiple players.

James Pattinson 2+ wickets
James Pattinson has enjoyed the matches he has bowled for the Heat, with a five-wicket haul already under his belt. The Stars are very tough to crack, but it appears that using pace is the best way to break through the openers and expose the middle order. Pattinson has some history with Marcus Stoinis and would love to get him out early.

Melbourne Stars to win
Back in the Stars to beat the Brisbane Heat at Australia’s home of cricket. We haven’t seen the Stars lose a game at the MCG yet this season, and we do not think the Heat will be the ones to defeat them.