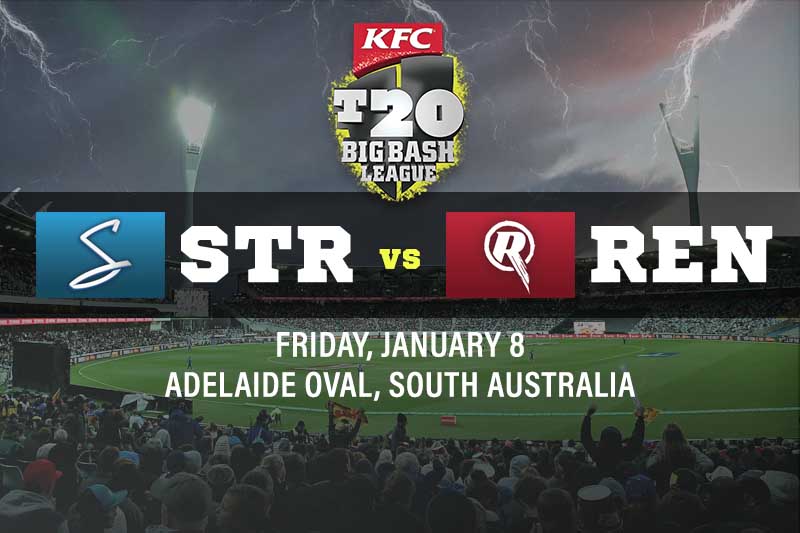 For the second time in 72 hours the Adelaide Strikers will host the Melbourne Renegades in BBL action on Friday night at the Adelaide Oval.

The Strikers produced one of their best all-round performances on Tuesday night when defeating the Renegades by 60 runs and handing the ‘Gades another embarrassing loss.

The Strikers got off to a reasonable start following contributions by Matt Renshaw and Alex Carey, before Jake Weatherald and Ryan Gibson combined for a 94 run partnership for the fifth wicket and were able to accelerate the total to 5/171 which proved to be too much for such an inexperienced Renegades batting lineup.

After Harry Conway dismissed Aaron Finch with the first ball of the Renegades run chase, it was always going to be an uphill battle against the handy bowling attack the Strikers possess. Peter Siddle and Wes Agar managed to pick up three wickets each, while Danny briggs snared 2/17 off his four overs to keep things nice and tight from one end.

Can things get much worse for the Melbourne Renegades? Aaron Finch is yet to make a score over 40, Shaun Marsh is unavailable, Rilee Rossouw has pinged a hamstring and Mohammad Nabi is horribly out of form. It was a seventh straight loss for the Melbourne Renegades which is remarkable when you think that they were the BBL08 champions two summers ago. A 67 run partnership between Sam Harper and Mackenzie Harvey was arguably the highlight of the Renegades’ night on Tuesday and Imad Wasim managed to pick up 2/13 off three overs.

It was a near perfect performance by the Strikers on Tuesday night, and with the Renegades set to be without Shaun Marsh and Rilee Rossouw for a second-straight game it is hard to make a case that they will be able to overturn their 60 run defeat. With their batting lineup setting a total of 5/171 the Strikers never looked like losing to the ‘Gades. We’re backing the Strikers to hand the Renegades a record eighth loss in a row.

In many ways Matt Renshaw has become the forgotten man in Australian cricket, a couple of concussions on a tour to the UAE and he was quickly discarded. The Adelaide Strikers will not mind though, he has been elevated to the top of the order to open with Phil Salt and almost be the anchor throughout the Strikers innings. He’s developed into a more attacking batsman over the past 18 months, and coming off his highest score of BBL10, we’re backing the Queenslander to put together consecutive contributions from the top of the order.

In combination with Wes Agar, Peter Siddle has fast become an impressive Twenty20 bowler despite building his career around the longer formats. He has 13 wickets from eight BBL10 matches and was near unplayable on Tuesday night when claiming 3/16 off 3.1 overs. Siddle rarely gets hit around the park, and comping up against an inexperienced Renegades batting he should be able to take a couple of scalps.