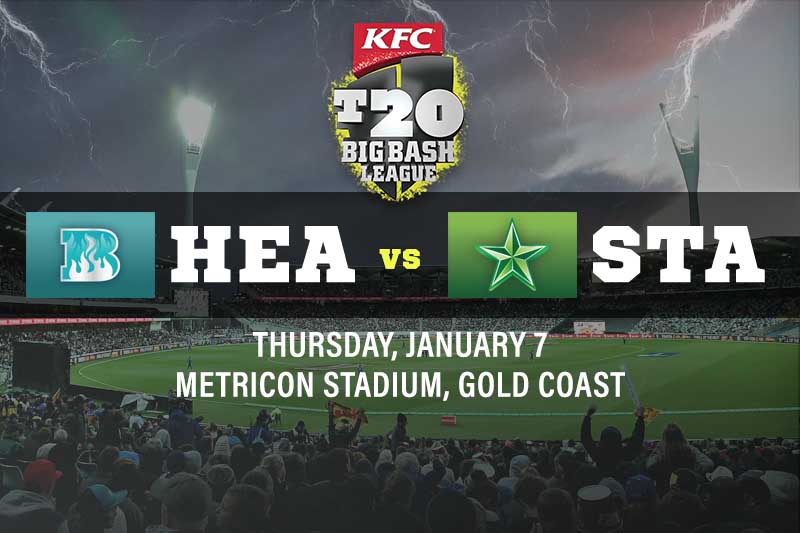 We are over halfway in BBL10, and the frenzy continues on Thursday night as the Brisbane Heat host the Melbourne Stars at Metricon Stadium, in the second match of a Thursday night double header.

Both sides are coming off impressive wins on Monday night. Brisbane managed to put together a near perfect run chase when chasing down 174 in the final over against the Sydney Thunder. The Melbourne Stars on the other hand managed to defend 183 after a Marcus Stonis masterclass where he hit 97* off 55 balls that included seven fours and seven sixes.

Brisbane were buoyed by the return of Chris Lynn on Tuesday night, albeit as the X-Factor sub when opening the batting with Max Bryant. The Heat looked to have a touch of calm about them on Tuesday night thanks to half centuries from their import Joe Denly and the returning Joe Burns who put a poor summer behind him and adopted the “see ball, hit ball” regime.

The Heat have also put together a consistent bowling attack with the likes of Mujeeb Ur Rahman, Lewis Gregory, Mark Steketee and Xavier Bartlett consistently snaring wickets at key times.

The Stars on the other hand were set up perfectly by Marcus Stoinis, Nicholas Pooran and Hilton Cartwright with the bat. An unlikely success with the ball, Sam Rainbird, managed to snare 2/22 off his four over spell to help the Stars defend the good work their batsman did.

Guide: How to bet on cricket

Despite the Stars being the more consistent of the two sides in recent times, the value is there for the Brisbane Heat to continue their good form on Thursday night. The Heat’s batting line-up of Bryant, Lynn, Denly, Burns and Gregory looks great on paper and with the likes of Wildermuth and Pierson still to come, have the heavy-hitters required for big scores. With a superior bowling line-up to the Stars, we’re confident the Heat can bring up their fourth win of BBL10 campaign with an all-round performance against the Stars.

Two explosive opening partnerships come up against one another on Thursday night. Andre Fletcher and Marcus Stoinis for the Stars and Max Bryant and Chris Lynn for the Heat. The reason why we have the Heat coming out on top, is the fact Xavier Bartlett tends to strike with his first over, and with an attacking Andre Fletcher we think the West Indian will be vulnerable to the swing Bartlett gets early on and could be dismissed nice and cheaply.

The Brisbane Heat captain made his Big Bash League return from a hamstring injury on Tuesday night and was back to his dynamic best when blasting 30 off 16 balls at the top of the order. We’re tipping the Heat will stick with Lynn and coming up against the likes of Rainbird and Stanlake early on, Lynnsanity could well and truly take off at the Gabba against the Stars.