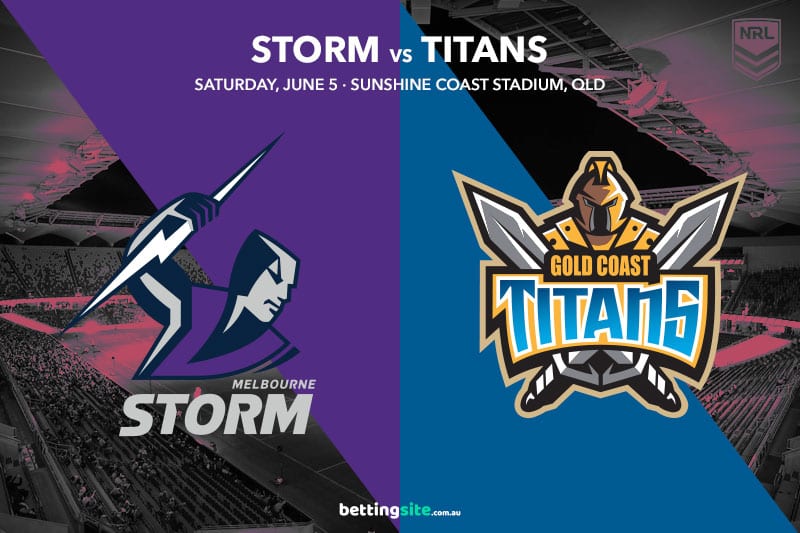 Nine State of Origin players will be missing for Saturday’s clash between the Melbourne Storm and Gold Coast Titans in Round 13 of the 2021 NRL Premiership.

The Storm have relocated to their 2020 home at Sunshine Coast Stadium, and despite a huge exodus of top-line talent in this game, they are still almost unbackable at $1.11.

The absence of Tino Fa’asuamaleaui, David Fifita and AJ Brimson has made the Titans’ head-to-head price uglier than a pair of bowling shoes. What has also added to the long odds is their miserable performance against the Sharks in Round 12 where they were blown off the park and offered little resistance in a 38-10 loss.

One exciting name for fans to look out for is Jayden Campbell, the son of NRL legend Preston Campbell, who will make his debut for the Gold Coast at fullback.

There is some inexperience in the outside backs and all of the usual favourite options for the Melbourne Storm, so the form guide has to be explored a little deeper than the norm. George Jennings and Dean Ieremaia are both in single figures and are both a good chance to score first when you account for the Titans’ abhorrent defence on the edges. Jahrome Hughes at $17 is another one punters should look to for this game; he will be forced to step up as the senior member of the spine, and his running game will put the shaky Titans on tilt.

The overs on the total points line at 48.5 should be taken, and if you’re feeling really frisky, why not get on the -22.5 line on Melbourne? They’ve won their last 22 games in Queensland and the margins in their last two wins in the Sunshine State have been by 28 and 26 points, so there are runs on the board.

Just where do the Titans look for points when they are on the attack against one of the best defensive units in the competition? With their two star forwards missing they lack strike power in the pack, and AJ Brimson is their most dangerous back, so who steps up?

He may not help them win the game, but the unorthodox style of debutant Jayden Campbell has the potential to catch the Storm napping. He is paying $3.75 at Sportsbet to score a try at any time, so get behind the son of a gun. Kevin Proctor at $6.50 against his former club is another outsider that could get the job done up against Tom Eisenhuth and the diminutive Hughes.

Unfortunately for Gold Coast fans, the +22.5 line doesn’t look attainable. Even against a depleted Storm side, you just can’t trust the Titans to step up in this situation.

With so many big names missing for this clash, it’s an up-and-comer and a returning star who hold the cards for this game. Cooper Johns has improved week by week and is going to have to take another leap with some strike players missing, as he will have to create more space for some less-talented outside backs. Ash Taylor returns from injury for the Gold Coast Titans in the no.6 jersey and has to make his presence felt immediately. Can his short kicking game exploit the inexperience of Dean Ieremaia to set up a try for Anthony Don, or can he get Kevin Proctor one-on-one close to the line with Jahrome Hughes? Both of these guys have a huge role to play.

The Storm should do enough to win at the -22.5 line, even if they don’t play particularly well. Their defence will suffocate the Titans without their big guns, and there is still enough class in the Storm side to score 30 points.

Storm -22.5 with Nicho Hynes and Jayden Campbell to both score a try at $15.75 with Sportsbet is a great way to gear up for State of Origin.