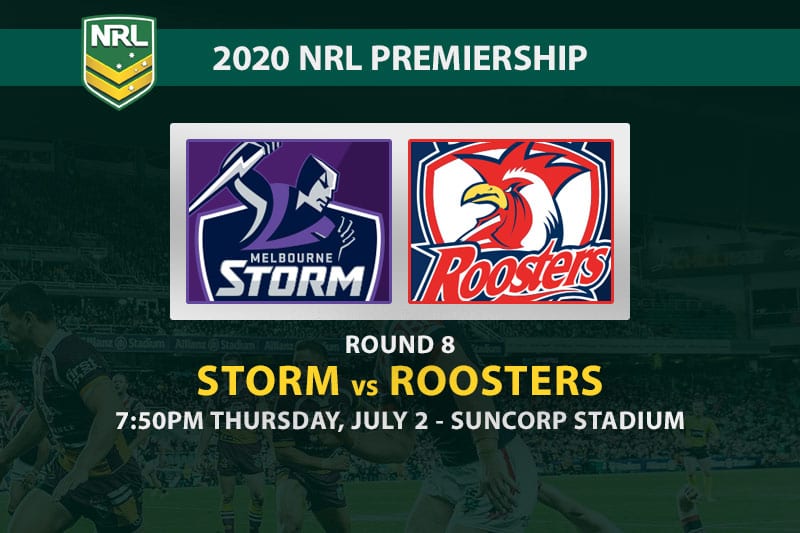 Having been stuck with some average Thursday night games this season, NRL fans can rejoice with a genuine clash of the heavyweights to kick off round eight.

It isn’t surprising to see the Melbourne Storm as the underdog for this clash, but what is surprising is the $2.95 price.

The Sydney Roosters have lost two key components in Victor Radley and Sam Verrills to ACL injuries and just what they do to replace them, especially a player as important as Radley, will be interesting to see.

Nat Butcher has been named to start at lock, but don’t be surprised if Lindsay Collins starts at prop and Sio Siua Taukeiaho moves to the no.13 slot.

The big out for the Storm is Cameron Munster, who will be replaced by Ryley Jacks. Just how they score enough points to win without their star five-eighth will be the big question.

The over/under line of only 35.5 points has no doubt been influenced by all those missing key players. You would be all over the unders if the game was played on a greasy Sydney surface, but the drier playing conditions in Brisbane should see the bulk of punters take the overs.

Brett Morris was the first tryscorer last start for the Roosters and is paying as much as $11 to do it again, but a roughie people might consider in this market is Angus Crichton at $23 with BetOnline.

The absence of Munster on the Storm’s left defensive edge gives the Roosters an area they will look to exploit. Jacks may have to defend in that slot, or else Jahrome Hughes may switch from the right to the left.

While Melbourne usually have a solid defensive unit, this is one potential chink in the armour. And if any team knows how to exploit a perceived weakness, it is the Sydney Roosters.