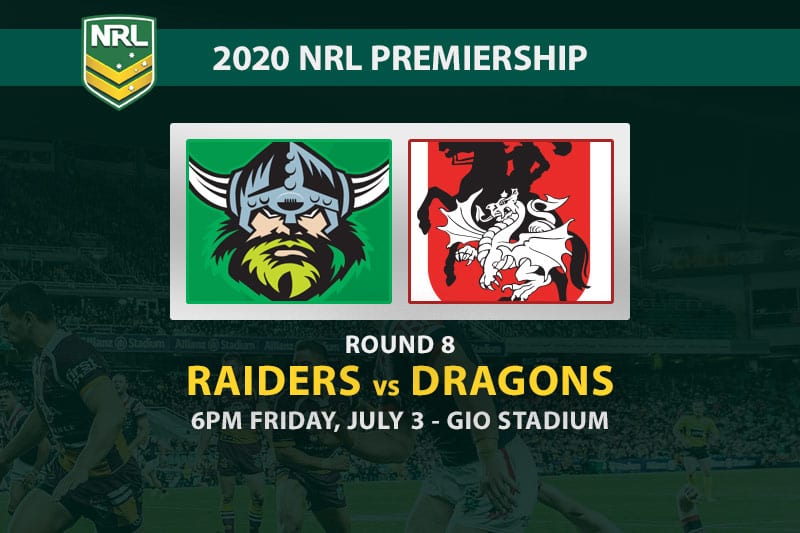 This was forever a hoodoo game for the St George Illawarra Dragons before they snapped the streak in 2013, and they have claimed their fair share of wins in this fixture since then.

However, given the Canberra Raiders finally get to play their first game of the year in the nation’s capital, Friday’s matchup may well be a bridge too far once again for the Saints.

Since their 22-2 loss to Canterbury, the Dragons have won two games and held a 12-10 lead over the Roosters before being outclassed in the closing stages of the match.

It indicates an improved form line heading into this clash, but the huge price of $4.25 in the head-to-head betting suggests they are friendless.

The Raiders last season went through a patch similar to their current form, losing multiple games in a row before grinding out a 12-10 win over the Bulldogs.

Expect them to do the same in this game, making the $3 on offer at Sportsbet.com.au for a Raiders 1-12 win a tantalising prospect.

Canberra made the big but ultimately easy decision to drop Curtis Scott, who has been directly responsible for 50% of their tries conceded since the competition resumption.

It will see the reliable veteran Michael Oldfield take his place while Scott goes to the interchange. Bailey Simonsson will also start on the right wing with Jordan Rapana missing due to a calf injury.

The Dragons have opted to keep the same lineup which pushed the Roosters all the way, but again you can expect to see Trent Merrin push back to the bench like he did last start.

St George Illawarra have struggled defending kicks this season, so the $12 at BetOnline for Jarrod Croker to score the first try is very attractive given how good the Canberra captain is both in the air and chasing grubbers.

If you think the Dragons can set the tone and get the first try of the night, Matt Dufty at $21 may be a good shout on the back of his recent resurgence in form. The $3.75 for anytime tryscorer is also worth a pop.

Best bets for Raiders vs Dragons