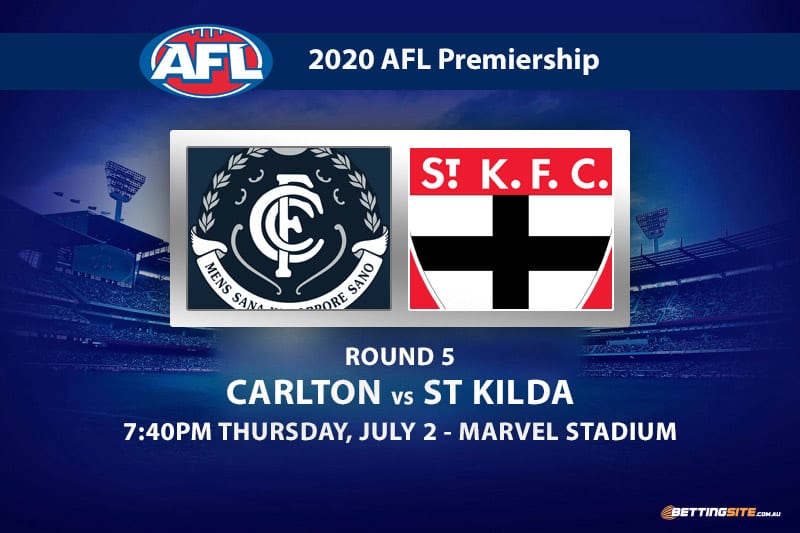 The newest restrictions implemented by the Queensland government have made it all but impossible for Victorian teams to enter the Sunshine State, meaning this match has been moved forward to replace the Richmond and West Coast game.

Formerly scheduled for Saturday afternoon at the MCG, the switch to Marvel Stadium on Thursday night would appear to favour a St Kilda side that beat the Western Bulldogs and Richmond under the roof.

While the Saints stunned the Tigers in round four, Carlton survived a nervy last minute to edge out Essendon by a single point in chilly conditions at the ‘G.

Moving the game forward from Saturday to Thursday makes selection tough for the Blues, as it will be a race against the clock for Jack Silvagni to recover from his fractured rib and Harry McKay to overcome soreness.

On the other side, the Saints will more than likely enter the match unchanged after a strong performance, unless Zak Jones is still struggling with an injury that saw him sit out the last quarter against the Tigers.

There is a bit of buzz around both these clubs in 2020, and you can bet the winning side’s supporters will have plenty to say afterwards.

With Sam Docherty back alongside him and another year in his legs, Kade Simpson has not been as productive as usual this season. Although Simpson’s numbers are down, he normally has great games against the Saints. St Kilda will put more effort into Docherty following his 32 disposals against the Bombers, leaving room for Simpson to carry more weight.

Jack Billings has been exquisite this season, having an impact both on the scoreboard and up the ground for the Saints. The classy lefty is a prodigious kick of the footy, so his teammates try to get the ball in his hands as often as possible. Coming off a 25-disposal game against the Tigers and 26 in his last clash with the Blues, Billings is the go-to man this Thursday.

The years where Levi Casboult couldn’t kick the ball for love nor money are past him, if recent form is any indicator. The big utility has always had some of the best dukes in the league, but his newfound confidence in front of goal is a game-changer. If the Blues keep Casboult forward and he continues his momentum from last week, you can expect him to snag a couple.

Although he went goalless against the Tigers, Max King was one of the better players on the ground. He competed well against the likes of David Astbury and Dylan Grimes and brought the ball to ground time and again, not allowing Grimes to take a single mark. King will have the in-form Jake Carlisle to deal with this week, but we are backing him to take his chances in front of goal.

We like the way Brett Ratten is getting the Saints to score this season, as they use a great blend of smalls and talls to score. They came through for us last week in the total points department and we see this as another Marvel Stadium shootout that will go well above the 130-point mark.

The Saints can beat just about anyone with the calibre of footy they played last week, but the biggest losing margin the Blues have suffered this season was 24 points in round one. Both teams are ultra-competitive and will score quickly from turnovers, but St Kilda’s superior forward setup will win the day.