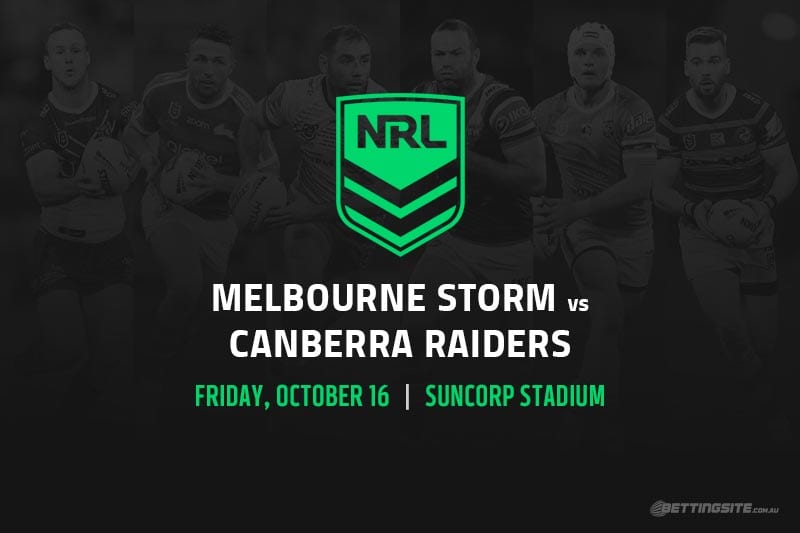 Finals footy is good at the best of times, but this contest could turn a jellyfish stiff.

If the Canberra Raiders can go to Suncorp Stadium and end the Storm’s incredible three-year winning streak at the venue to go to the 2020 NRL Grand Final, every member of the public should stand and applaud.

Canberra have won three of the last four between the two clubs, and nobody should be ruling them out after their ironman effort against the Roosters.

The $4 for a 1-12 Raiders win is a good price, but the $2.88 for the favourites is also solid considering their winning record at Lang Park.

Canberra’s playing style matches up well with the Storm; Josh Papalii’s strength, footwork and offloading will cause issues in the middle, while Joe Tapine should be strong again after his awesome outing against the Roosters.

You won’t see the Raiders run too many block shapes at the Storm defence, instead opting to use guys like Charnze Nicoll-Klokstad to support through the middle while John Bateman acts as a second receiver at different stages on the right-hand side.

Canberra mix up their left edge well and last week did a terrific job in using Jack Wighton.

The 2019 NRL Grand Final was all about Wighton running the ball, but instead he was happy to play different shapes with Elliott Whitehead and Jarrod Croker to mix up the attack and then run more in the second half to great effect.

Both Canberra edges have different tendencies, which makes it harder for the Melbourne Storm to organise their defence.

Melbourne will have Cameron Munster on the field, but just how healthy is his knee?

It has plagued him at different points of the season and was once again aggravated in the win over Parramatta.

The Storm’s left is their calling card. Without Munster at his explosive best, the rest of that side of the field can’t function as a cohesive unit.

Justin Olam is $15 to score first and should be considered on the back of his damaging form of late, especially with Canberra’s Jordan Rapana carrying a sternum injury.

Outside of Cameron Smith, the other enormous key for a Storm win is fullback Ryan Papenhuyzen.

His ability to pop up on any inch of the field is extraordinary, and he can beat you through the middle or simply run around you.

Papenhuyzen is Melbourne’s go-to guy when the pace of the game quickens, which he showed with a tremendous game against Parramatta in the qualifying final.

That game was played at breakneck speed, so Canberra fans will be hoping their team can control the tempo and keep it as slow as possible.

Melbourne teams have had a reputation for grinding and wrestling their way to victory, but this version of them plays so well in fast-tempo games with the blistering speed they possess in the back five.

Suliasi Vunivalu at $9.50 looks a great bet for first tryscorer, as Melbourne will have figured out how to exploit the way young Semi Valemei shoots out of the line for Canberra.

Best bets for Storm vs Raiders