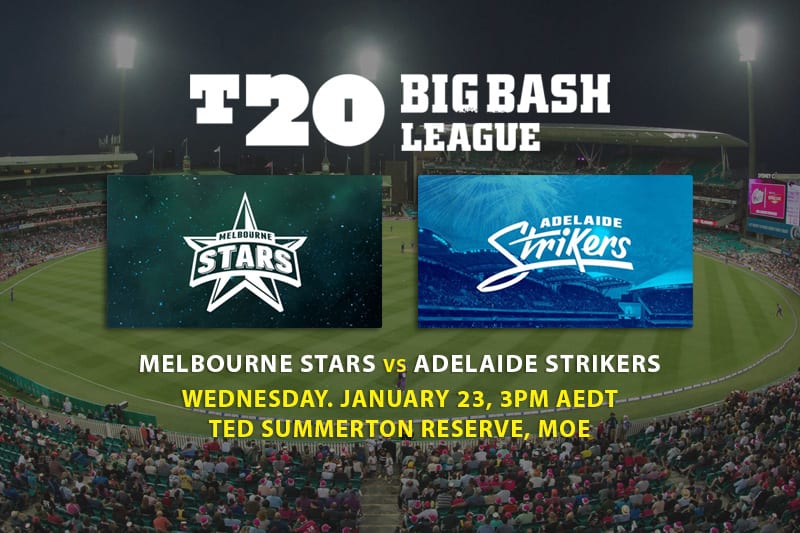 Kicking off Wednesday’s BBL double-header will be the Melbourne Stars and the Adelaide Strikers.

The Stars and Strikers sit fifth and sixth respectively on the BBL ladder, just a win short of a top four position.

After a close victory over cross-town rivals, the Renegades, the Stars are seated perfectly to pounce on the Strikers.

Adelaide will play its second match in three days, which includes a plane trip interstate.

In the last match against the Hurricanes, Adelaide failed to take a single dismissal, allowing Matthew Wade to make 84no and D’Arcy Short 73no, inevitably losing by 10 wickets with three overs remaining.

It was less than two weeks ago when the Strikers beat the Stars convincingly at Adelaide Oval, bowling out the Stars for 137, 41 runs short of the Strikers’ 178 total, but the likes of Maxwell, Zampa and Stoinis were all absent due to international duties.

Marcus Stoinis played out of his skin in his return from Australia’s ODI series against India.

After winning the bat-flip and electing to bowl, Stoinis took three valuable wickets and bowled incredibly efficient with a 4.75 economy.

In the Stars’ innings, Marcus opened the batting and remained at the crease until the end of the match, ultimately finishing with an unbeaten 70no from 65 bowls.

It was a man-of-the-match performance that the Stars will need to see replicated against the Strikers.

Stoinis is yet to face the Strikers as he was playing internationally when they faced off earlier in the season, but you can be sure he will bowl four overs and open the batting, giving him plenty of opportunities to make an impact on the match.

We’ve got two evenly-matched sides that both possess world-class players — it’s sure to be a tight contest.

Whether Stoinis and Maxwell can out-last Rashid Khan and Billy Stanlake will be the key to Melbourne’s success.

If Stoinis can face 30 balls, you can be sure he will post a large total, especially since the Ted Summerton Reserve will be a smaller pitch than the Stars’ home ground at the MCG.

Expect the Strikers to throw everything at the Stars, but fall short with the bat in hand, as the class of Zampa and Stoinis will be too tough for the Strikers to handle.

Melbourne Stars to win – $1.81 with Sportsbet