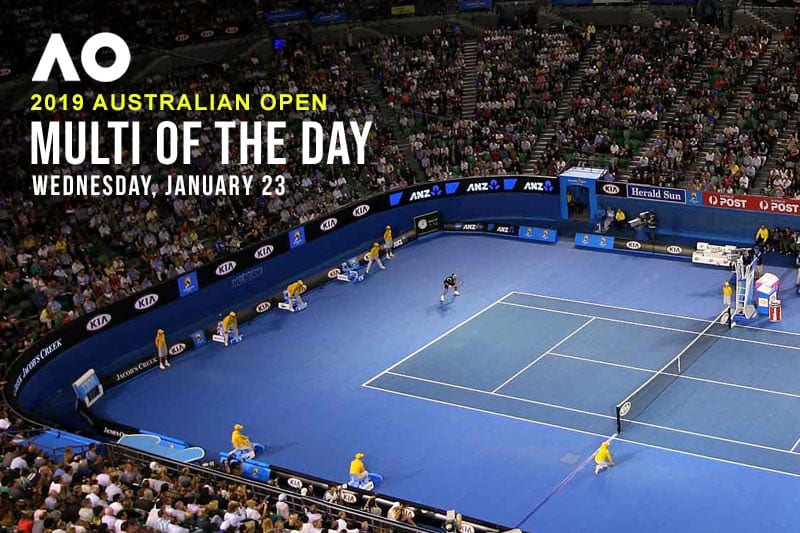 WEDNESDAY’S Australian Open schedule is all about the big guns.

There is plenty of star power left in the women’s draw, with three of the top seven seeds – and Serena Williams – in action on January 23.

Let’s see if we can find some value bets for a quarter-final multi at Australia’s best tennis betting sites.

One glance at the head-to-head record is all you need for this one.

Djokovic has won each of his 14 encounters with Nishikori since the Japanese star’s upset victory at the 2014 US Open.

That includes four victories in 2018, two of which occurred in the final week of a major.

Nishikori has had to work a lot harder to get this far, so everything points to a comfortable win for Novak.

When fit and firing, Raonic is very hard to beat.

Just ask the likes of Nick Kyrgios, Stan Wawrinka and Alexander Zverev, all of whom have fallen to the Canadian’s monster serve in the past week.

Pouille has lost all three of his previous encounters with Raonic, but the Frenchman may fancy his chances after a solid win over Croatia’s Borna Coric.

The odds say otherwise, however, and Milos in straight sets ($2.20 at Sportsbet) looks a very good bet.

If there were any doubts about Serena’s title credentials, she blew them away on Monday night when she overpowered top seed Simona Halep in three sets.

The American superstar is now a $2.40 title favourite at Sportsbet as she looks to equal Margaret Court’s record of 24 major singles crowns.

Pliskova is hoping for a repeat of the 2016 US Open, when she defeated Williams to book a spot in the final.

The Czech comes in off a dominant win over Garbine Muguruza, but this is where her run will end.

Osaka enjoyed a breakout campaign in 2018, but Svitolina was one obstacle she failed to overcome.

The Ukrainian won both of their encounters last year and holds a 3-2 advantage in the career head-to-head stakes.

One could make a very strong case for both players, but the value about Svitolina is too good to ignore.