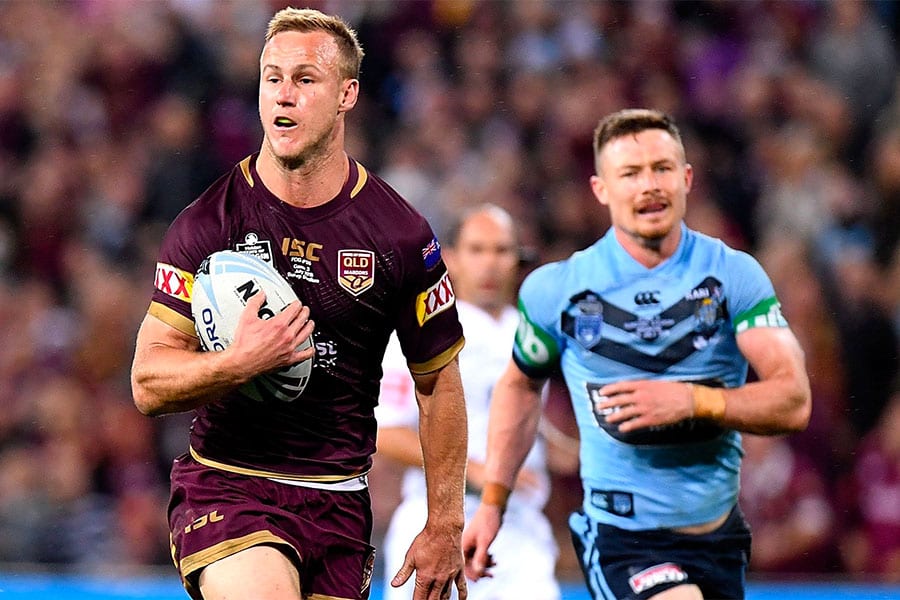 It might be November 18, but we’ve finally made it to the end of what has been a memorable rugby league season.

This will forever be the COVID-19 season, but fans will be treated to a State of Origin decider at a full Suncorp Stadium this Wednesday night.

Let’s take a look at the latest odds and best bets on offer at Australia’s top State of Origin betting sites.

It started with an 18-14 win by an underdog Queensland side before they were off the park by a red-hot New South Wales outfit 38-6.

The 2020 edition is shaping up as almost a mirror image of that series, with Queensland winning by an identical margin in game one and then going down 34-10 in game two.

I guess we should all be expecting the Blues to win the series on the last play again with a James Tedesco try?

While that would be incredible coincidence, the ‘Lang Park factor’ will no doubt play a role and you can expect Queensland to lay down for absolutely nobody come Wednesday night.

They are at $2.90 head-to-head, which is easily the shortest price for them all series and a nod of respect from the rugby league public regarding their fantastic record at Suncorp Stadium.

The Maroons have won eight of the last 10 game-three clashes played, but can they avoid defeat in a second straight decider? It’s something they haven’t done since 2004/2005, right before the dynasty started.

The Blues’ last memories of a decider in Brisbane are the most painful, as they were dusted up 52-6 in what was one of the more putrid performances ever put together by a representative side.

Before that, in 2012, it was the 40-metre Cooper Cronk field goal that denied the Blues’ a series win in what was arguably the greatest decider ever played.

The year previous was Darren Lockyer’s farewell and the game was over in 20 minutes.

NSW’s only happy memories of deciders at Lang Park were courtesy of Laurie Daley and Andrew Johns in 1994 and 2005 respectively.

The Blues’ two greatest players had to deliver Man of the Match performances to bring the shield south of the border. Might we see another hero join that list?

Tedesco is already an Origin legend. In just 12 games, he has cemented a legacy as arguably the Blues’ best-ever fullback.

Garry Jack was a fine player and Tim Brasher represented his state 21 times, but what Tedesco has done in just a few years has been extraordinary.

He will be looking to win his second game as skipper and lead his team to a third consecutive series win.

Queensland and Wayne Bennett could be up to something.

Corey Allan is named to make his debut on the wing, but no one knows more than Bennett just how much better the South Sydney prospect looks when he slots in at fullback.

Expect to see Valentine Holmes move to the wing, where he has crossed eight times in five Origin appearances.

On that number alone, the $12 for Holmes to be first tryscorer and the $2.40 for him to score anytime will be eaten up.

Queensland’s forward pack is also at full strength with the return of Christian Welch, and the debut of Harry Grant from the interchange could be an enormous wildcard.

Just what the Storm sensation will provide from the bench is anyone’s guess, but Grant’s inclusion will allow the Maroons to play a fast pace through the middle in a bid to tire out the NSW big men.

He is $23 to win the Man of the Match award, and you shouldn’t put it past him.

The Blues will go into the decider with the same 17 who spanked the Maroons at ANZ Stadium last Wednesday night.

Question marks still surround the decision to play Clint Gutherson at right centre, but it would have been a bold decision to change a winning team for a decider.

Kurt Capewell has had plenty of good moments marking up against Gutherson, and it might cause a few punters to take on the $26 for the Queenslander to be first tryscorer.

The money in that market is coming in heavily for the Blues speedsters, but Origin is full of twists and turns.

Ryan Papenhuyzen is named as the 18th man for NSW but is a short $10 to score the first try. Does someone know something we don’t?

New South Wales showed in game two that they are oozing with talent and their best is just too good for Queensland.

The $2.80 for a 1-12 Blues win feels about right, as the 13+ margin seems a stretch given the Maroons’ history at Suncorp Stadium.

James Tedesco was fantastic in game two and is the consensus pick to win the Man of the Match award at $6.

One roughie punters might want to look towards in that market is Josh Addo-Carr at $51. He has scored four tries in the series so far and been terrific in both games.

Wingers have to produce absurdly good performances to win the award (Jarryd Hayne twice), which explains the price, but it’s just too hard to pass up a few spare bucks on The Fox.

Dane Gagai is overdue to score the first try in Origin, and you just have to throw some money his way at the $15 quote.

He has been half that price in the past and never played a poor game at this level, so he is the pick to get the first try.

Josh Addo-Carr for Man of the Match