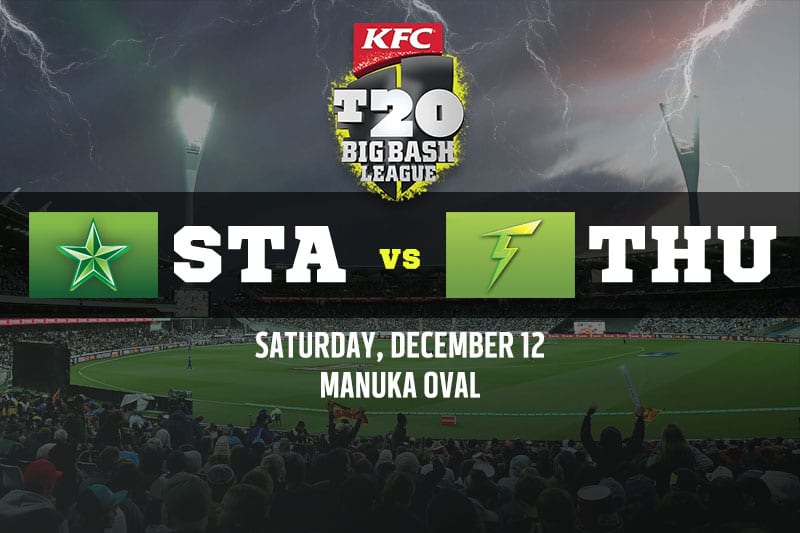 After kicking off their Big Bash League campaign on Friday, the Melbourne Stars will front up again on Saturday afternoon as they take on the Sydney Thunder at Manuka Oval.

This will be the first look we get at the Thunder, who online bookmakers rate as long shots in the BBL outright betting.

Both clashes between these two in BBL09 resulted in wins to the Stars, but they did have to work hard for both of them, including a last-over triumph in their first battle.

Starting in the twilight time slot, this match will help us assess both the Big Bash’s championship favourites and the biggest outsiders.

Look for Usman Khawaja and Alex Hales to get the Thunder off to a flyer at the top of the order. The Stars have a very strong middle order, but there has been some conjecture surrounding Nic Maddinson at the top end, which is why we prefer the Thunder’s settled pair of openers.

Both BBL09 clashes against the Thunder were enjoyable nights for Marcus Stoinis, who made two half-centuries for the Stars. The West Australian is one of the most damaging batsmen in the BBL, leading the league last season with a record 705 runs at 54.23. The raw power of Stoinis will trouble the Thunder once again on the broad expanses of Manuka Oval.

Having taken the most wickets in BBL09 with 30, Daniel Sams is one of the most dangerous pace bowlers in the competition. Sams recently played in the T20i series against India, where he was picked apart by the experienced international stars. This match will be his chance at redemption.