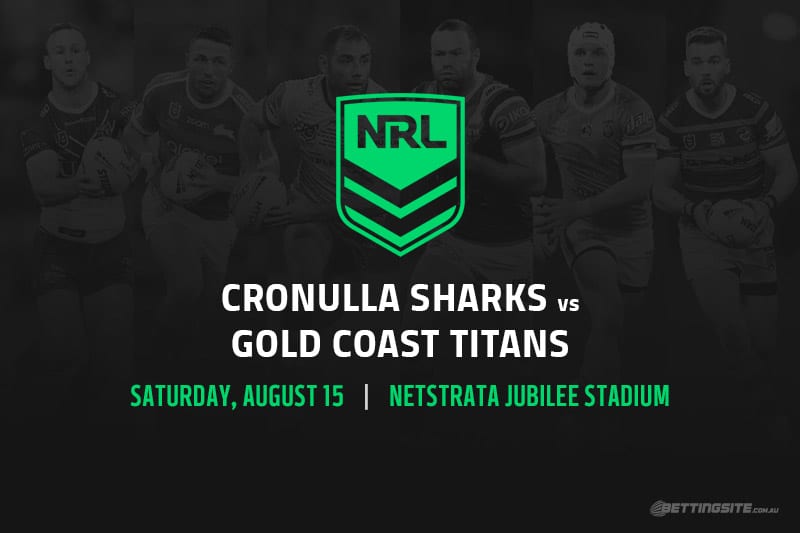 The Cronulla Sharks put 40 points on the Gold Coast Titans last time they clashed, but a lot has changed since then.

The Titans over the last month have put together a tremendous block of football and turned a few heads along the way, so much so that coach Justin Holbrook is in line for a contract extension.

Slowly but surely he has been able to implement how he wants his team to play, and they appear to be getting better every week, making this a danger game at home for the Sharkies.

Cronulla aimed up in the wet last round and scored more tries than Parramatta, but they couldn’t quite manage to get the win.

The markets for Saturday’s clash at Kogarah suggest they will respond to that disappointment with a fast start on Saturday, as both Cronulla wingers are at short odds to score first before a Titans player comes into the equation.

That said, taking the Sharks 1-12 at $3.10 has a lot of merit when you consider the Titans only lost by eight to Penrith and six to the Roosters.

If you do fancy the Sharks to win by two tries or more, you should be aware more rain is forecast.

With that in mind, you can take the Sharks -10.5 into under 43.5 total points for the match for a generous $4.50. That price may shorten closer to kickoff as the weather conditions become more apparent, but it does appear early the punters are underestimating the Titans.

As mentioned earlier, Sione Katoa ($8.50) and Ronaldo Mulitalo ($9) are well back in the first tryscorer betting, but we think the value lies with the Titans here.

Anthony Don has scored the first try in consecutive weeks yet is paying as much as $13 to repeat that feat this week. On that number alone, everyone should be obliged to back The Don.

Best bets for Sharks vs Titans