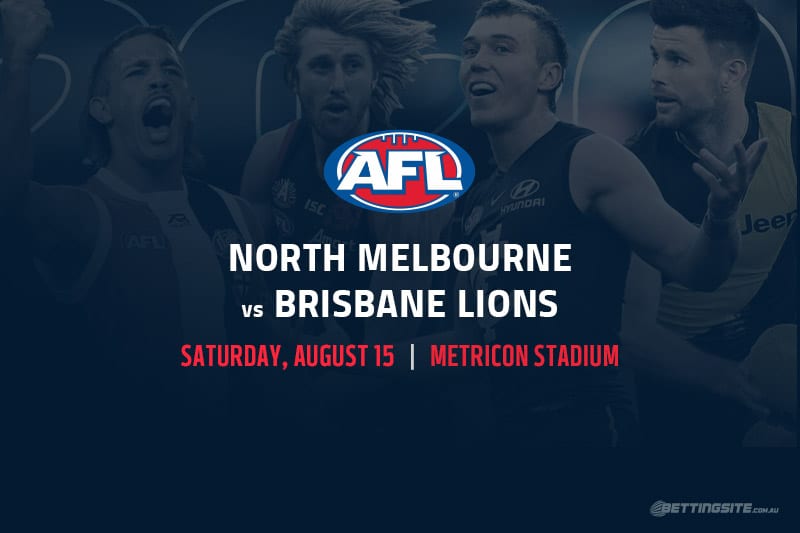 The North Melbourne Kangaroos will need to play their best when they tackle the red-hot Brisbane Lions at Metricon Stadium this Saturday afternoon.

Not only are the Roos in a form slump, the Lions are fresh off a great victory over the Western Bulldogs where they had 26 scoring shots for 96 points.

With 17 players on the injury list, including key position pillars, experienced midfielders and leaders of the club, the Roos are in the wars when it comes to fielding a side.

Majak Daw, Robbie Tarrant and Josh Walker could all miss this game with corked thighs and calves, while Aiden Bonar is ruled out with an AC joint complaint.

Top stopper Jed Anderson is also under an injury cloud, which is bad news for the Kangaroos as they prepare to take on the powerful Brisbane midfield.

Charlie Cameron managed to play out the Lions’ win over the Dogs after landing awkwardly on his left knee, but Chris Fagan and co. may well take the opportunity to rest their star forward.

Luke McDonald’s ability to play both defence and midfield has made him one of North Melbourne’s most valuable assets this season. He has tallied 86 touches in the last three games, including a career-high 35 against the Crows and 33 against the improving Demons. McDonald is spending more and more time on the ball and should offer some value for 25+ touches again this week.

Since coming back into the side in round nine, Alex Witherden has become the main man when it comes to kick-outs from full-back. His ball use is amongst the best in the league, as he picks off difficult targets and executes well under pressure. Witherden has tallied 25, 19 and 24 disposals in his last three games and averages over 20 touches against the Roos, making him a very valuable selection this week.

The Roos kicked a miserable five goals last week, and Nick Larkey slotted four of those. With Majak Daw and Josh Walker unlikely to play, Larkey could be the only key forward in the North Melbourne squad this week. The Roos will have a hard time scoring if they move the ball slowly, but quick ball movement to Larkey could result in a couple of goals.

Midfielders have loved playing North Melbourne in recent times. All three of the major ball-winners for the Demons went forward and kicked a goal last week, as there wasn’t enough pressure in the guts for North to stop them. We all know Dayne Zorko loves to push forward and kick goals, which the Brisbane captain has done in four of his last five games.

We suspect a big game when it comes to total points, as the Lions should be extremely efficient going forward. Not only is Eric Hipwood in goalkicking form, but Brendon Ah Chee also looked very promising when he drifted against the Dogs and could slip in nicely if Charlie Cameron is forced to rest.

Unless all of the North Melbourne players under an injury cloud get up for this game, the Roos are in huge trouble. The Lions are looking to usurp the Power at the top of the AFL ladder, and they need more percentage to make it happen. Lachie Neale and Jarryd Lyons will run riot in the middle if Jed Anderson doesn’t play, so back Brisbane for a big win.