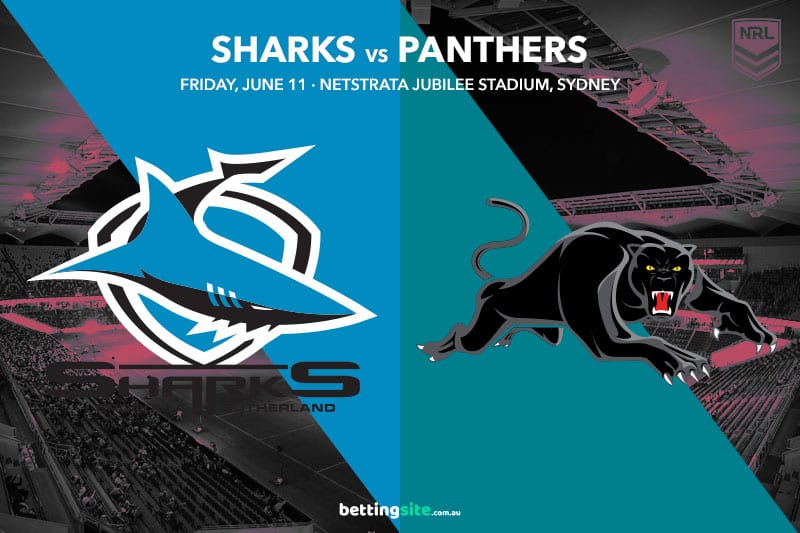 Round 14 of the 2021 NRL season will kick off at Netstrata Jubilee Stadium on Friday night with the Cronulla Sharks hosting an Origin-ravaged Penrith Panthers.

The Sharks are fresh off the bye and looking to secure a second consecutive win, while Penrith are coming off just their second loss in their past 31 games.

The Panthers had seven State of Origin players missing for their loss to the Wests Tigers, and they face the same prospect this week with less than 48 hours between kickoff of this game and the final siren of Origin I in Townsville.

Even though Ivan Cleary may name a full-strength side, it should be assumed almost all of Penrith’s starting 13 will be missing, paving the way for another potential upset win for a bottom-eight side.

The Tigers showed last week that if you take the best seven players out of any team, they are going to struggle. For that reason, get some money down on the Cronulla Sharks while they are flirting with the $3.50 price. Don’t put everything you have on them, and keep a little in the kitty in case you need to hedge and back Penrith late in the event that some of their Origin stars take the field.

Cronulla may lack the defensive grit they once prided themselves on, but they are never shy when it comes to throwing the ball around and scoring points. Shaun Johnson has played on the competition’s highest-scoring right edge every season since 2014, so when looking at anytime tryscorers, his side is the one that will give you joy. William Kennedy is the other Shark who feels like a better than 50% chance of crossing the stripe each week, so be sure to include him in your multis.

Depending on what troops back up from Origin, the head-to-head price for the Penrith Panthers could shift dramatically in the final hour before kickoff. If you like them to bounce back, the safest option is to assume Ivan Cleary won’t risk any of his star players and hold off placing a bet in order to get the best value possible. The -9.5 line is fraught with danger, but if it does shorten to around -6.5, that’s when you make the move.

Matt Burton got us a nice little return in the tryscorer betting last start, but outside of that, Penrith didn’t look like scoring. The good news for this game is Cronulla do not like to defend, so there should be plenty of points. Charlie Staines, Stephen Crichton and Dylan Edwards will be the three best chances in the back line to get across, while James Fisher-Harris is the big bopper who might crash over and give you the big return.

Matt Burton was disappointing in his first game of the year in his preferred five-eighth position, so when he comes up against Shaun Johnson, he is going to have to raise his game and play to the potential that so many see in him. It may well be the last chance he gets to play in the no.6 jersey at Penrith, so guiding them to a win minus their Origin stars would be a great feather in his cap. Johnson is effectively in the shop window for NRL clubs, so a win against the premiership favourites would be a nice way to kickstart negotiations on a new contract. Both are flamboyant and pop off the TV screen, so it is sure to be the matchup of Friday Night Football.

Penrith should win at the 1-12 margin. Cronulla have this characteristic about them where they can compete with good teams and then find ways to undo all of their work, and this game feels like one of those occasions.

Penrith at the small margin with William Kennedy, Charlie Staines and Stephen Crichton all to score a try pays a hefty $44.75 at Sportsbet.