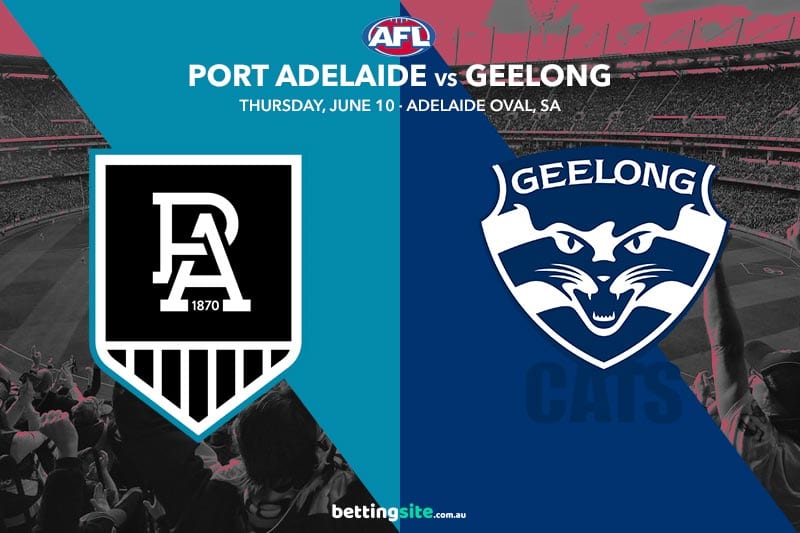 Thursday night footy makes a huge return to the AFL fixture with this blockbuster clash between the Port Adelaide Power and the Geelong Cats at Adelaide Oval.

The AFL officially approved the time and location of this clash two days before the first bounce, allowing the 2020 qualifying final rematch to kickstart round 13.

Chris Scott’s men have historically performed horrendously following their week off, as the Cats sit 1-8 after the home-and-away bye since 2012.
This year’s bye may have come at the perfect time for Geelong, however, since a few important players such as Patrick Dangerfield, Mitch Duncan, Cam Guthrie and Mark Blicavs could all return from injury.

The Power are not as fortunate on the injury front, as they have no returning players for this massive clash. Orazio Fantasia underwent knee surgery after Port Adelaide’s win over Fremantle, while Ryan Burton also reported a sore knee and could miss out this week.

Both teams have won eight matches so far this year, but the Cats enter this contest with more momentum after winning their last four games consecutively. Neither side has dominated the other in their recent clashes, as their head-to-head record sits at 3-3 from their last six encounters at the Adelaide Oval. A close match is on the cards this Thursday night, so look towards the smaller margin markets at AFL bookmakers.

There have not been many individual standouts from recent clashes between these two side, but we think one former Cat will light it up. Steven Motlop kicked three goals in last year’s qualifying final against the Cats, so there might be a few who take a punt on him to kick two or more goals this week at $4.50 with Sportsbet.

The 2006 AFL Draft class has turned out to be one of the strongest in history, with Travis Boak and Joel Selwood two of the most notable players from the pool. Boak and Selwood continue to excel at the highest level despite their age, and they should attract plenty of interest in the disposal betting markets. These two veterans will be key players in the midfield battle.

Ken Hinkley’s Power have been outstanding this season despite missing a few crucial players, which is why we think they will knock off the Cats at the Adelaide Oval this Thursday. Ollie Wines has taken his game to the next level, while the forward combination of Charlie Dixon, Mitch Georgiades and Todd Marshall is working a treat. We have settled on the 1-39 margin for Port since we are unsure how many Geelong stars will return in time for this clash.

Tom Stewart to get 25+ disposals

Geelong backman Tom Stewart has been one of the most consistent players in the AFL this season. Stewart has not dropped below the 20-disposal mark this year, while he has also found 25 or more in seven of his 11 games. The classy defender will get involved shifting the ball across half-back, which the Cats have done more often in the past month of footy.

Steven Motlop will star against his former side and help the Power get over the line against the Cats, while Tom Stewart will control the game in the defensive 50 for Geelong. Put it all together for a $20.25 return at Sportsbet.