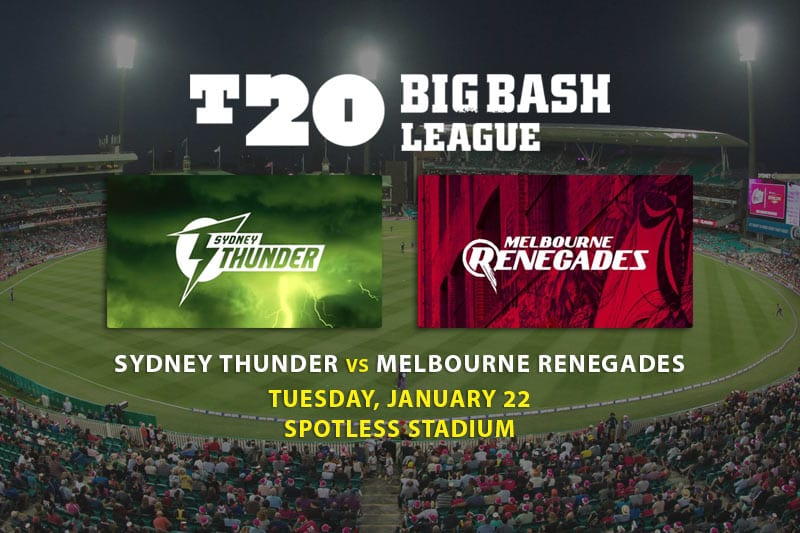 EVERY game counts for these two teams as we enter the business end of the 2018/19 Big Bash League season.

The finals push got a lot harder for the Sydney Thunder last Thursday when their clash with the Brisbane Heat was washed out with no result recorded.

It hurt all the more because Shane Watson’s superb century had put the Green Machine in the box seat at the Gabba.

Instead of sitting in the top two, the Thunder have four wins from nine games and need to keep winning to stay in playoff contention.

It is a similar story for the Melbourne Renegades, who have one of the poorest net run rates in the league despite winning five of 10 games.

Their derby defeat on Saturday night has not helped the situation.

The ‘Gades could only muster 121 batting first at Marvel Stadium, with Tom Cooper and Mohammad Nabi the only players to make any significant contributions.

That target was no trouble for the Melbourne Stars as Marcus Stoinis stroked an unbeaten 70 to get the job done with six wickets in hand.

There will be another enforced shakeup on Tuesday night as Marcus Harris leaves for Australia’s Test series against Sri Lanka.

That means a likely recall for Mackenzie Harvey, who was dropped for the loss to the Stars.

The Thunder needed somebody to step up and fill the Jos Buttler void and Watson has done it with big scores at the top of the order in his last two hits.

With Harris gone, Finch out of form and the most reliable runscorers batting down the order, Harper looms as the default option in the Renegades top order.

There are not many BBL bowlers with a better track record than this guy, who has taken wickets in six of the seven games in which he has bowled this season.

The South Australian quick leads the competition with 16 wickets at 14.93 and, with Usman Shinwari off representing Pakistan, is clearly the pick of the Renegades seamers.

Neither of these teams boast the deepest rosters in the competition, especially now the international fixtures have come into play.

Watson’s experience and class are critical for the Thunder, but the Renegades will have a similar asset if Finch can turn things around.

Both teams have holes in their batting, so it might come down to the quality of the bowling.

Richardson is having a terrific season for the ‘Gades, but the likes of Harry Gurney and Jack Wildermuth are not all that threatening.

Fawad Ahmed and Daniel Sams are big threats for the Thunder, but the wicket-taking options drop off markedly beyond those two.

The visitors look just a little more dangerous and versatile in the field and should fancy their chances in Sydney.