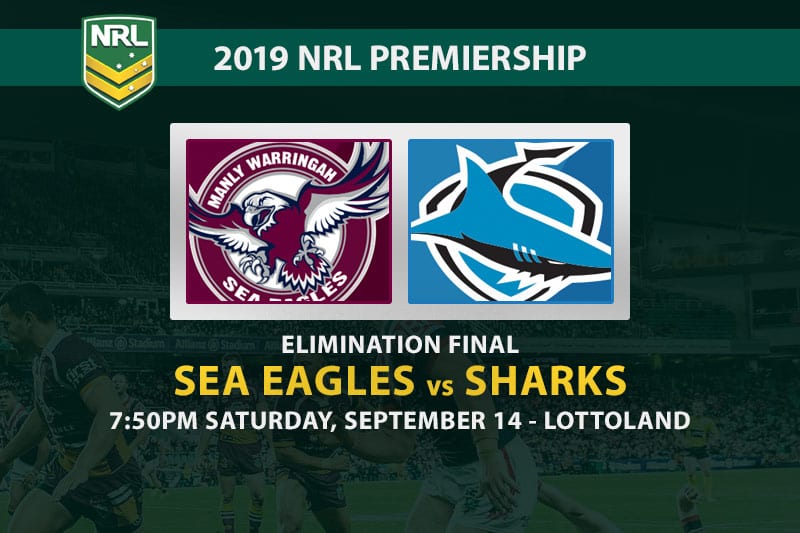 Lottoland has been given the all-clear to host Saturday’s cut-throat NRL finals clash between the Manly Sea Eagles and the Cronulla Sharks.

That is welcome news for Des Hasler and company as they struggle to put together a match-ready 17 amid an untimely injury crisis.

The Sharks have also had personnel issues this season, but most of their big names are available for the trip to Brookvale.

Manly finished two games clear of Cronulla to secure sixth place and a home final, yet it is the visitors who will start as favourites to reach the semis.

The big news out of Manly is the emergency signing of Tony Williams, who is named in the reserves but is expected to feature in the matchday 13. Taniela Paseka and Curtis Sironen are out injured and Marty Taupau is serving a suspension. Jack Gosiewski returns on the front row, while Haumole Olakau’atu and Toafofoa Sipley complete the interchange.

Ronaldo Mulitalo is out suspended, which sees Aaron Gray recalled on the wing. Aaron Woods starts ahead of the benched Andrew Fifita in the only other change to the side that belted the Wests Tigers last week. There is a slim chance of a late call-up for Matt Moylan, who is listed in the reserves alongside Blayke Brailey, Kyle Flanagan and Billy Magoulias.

Out: Ronaldo Mulitalo
In: Aaron Gray

Reuben Garrick – With Tom Trbojevic sidelined, Garrick looks the pick of Manly’s attacking options. Ladbrokes is offering $2.50 for the 22-year-old winger to score a try at any time.

Josh Morris – There is no substitute for experience, as Morris showed with his efforts for NSW in State of Origin this year. Get on the $12 odds at Sportsbet for first tryscorer.

Cronulla Sharks by 13+ points – $3 at Sportsbet

Manly are a much better team when Tommy Turbo is fit and firing – that is a stone-cold fact. The Sea Eagles have battled hard all year and deserve their spot in the top eight, but they are short-staffed in key positions and will struggle against a talented Cronulla Sharks side.