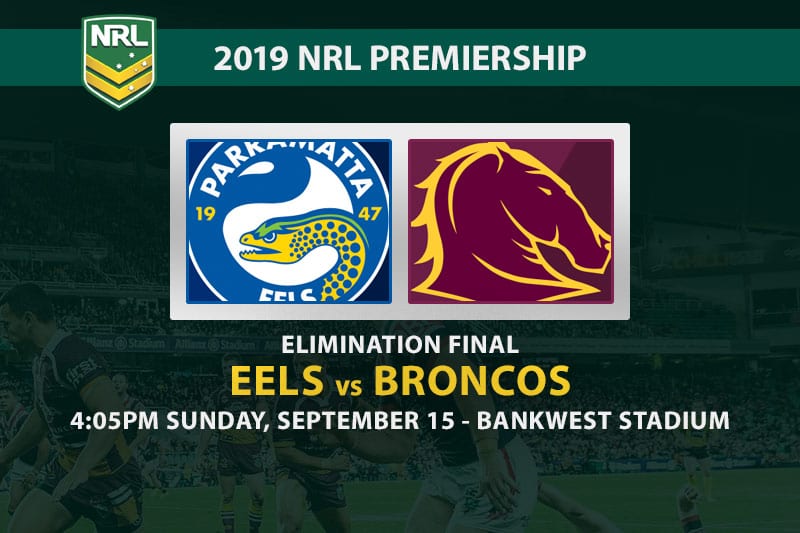 Will the Parramatta Eels’ impressive form at Bankwest Stadium stand up under the increased pressure of the NRL finals?

That is the big question ahead of their do-or-die clash with the Brisbane Broncos on Sunday afternoon.

The Eels secured fifth spot with a dominant 32-16 home win over the Manly Sea Eagles, so the signs are promising for Brad Arthur and company.

Parra will also take confidence from their 38-10 demolition of the Broncos at Fortress Bankwest back in round 14.

Brisbane squared the ledger with a golden-point victory at Suncorp Stadium two weeks ago, but their form lines are all over the shop.

Anthony Seibold’s men were hammered by the Canterbury Bulldogs in the last round and will need to show a lot more mettle if they wish to advance to the semi-finals.

Kane Evans was named to start but then copped a ban for a careless high tackle, so the Eels will have to do some tinkering with their team sheet. Nathan Brown returns at lock, Daniel Alvaro moves to the bench and Tepai Moeroa drops to the reserves, although the latter is likely to earn a reprieve in Evans’ absence.

Out: Kane Evans
In: Nathan Brown

Joe Ofahengaue is named at starting lock after missing the last fortnight with a calf complaint, while Gehamat Shibasaki steps onto the interchange alongside Patrick Carrigan, Thomas Flegler and James Segeyaro. The men to miss out are Rhys Kennedy and Izaia Perese, both listed among the reserves.

Maika Sivo – Parra’s rookie winger has enjoyed a fine first season in the NRL, taking his try tally to 20 with a hat-trick against the Sea Eagles. Bet365 is offering great odds of $4.75 for Sivo to score two or more tries.

Kotoni Staggs – This guy has been a revelation in the back half of the year, crossing for 11 tries in his last 13 games. Check out the value on offer at Sportsbet, where Staggs is paying $2.80 to score a try at any time.

Eels vs Broncos stats and trends

The Broncos have loads of emerging talent, especially in the forwards, but they are a little light in the key playmaking positions. If Parra’s big men do their job, Mitchell Moses will have all sorts of space to weave his magic by hand and foot. All signs point to a comfortable win for the Eels.