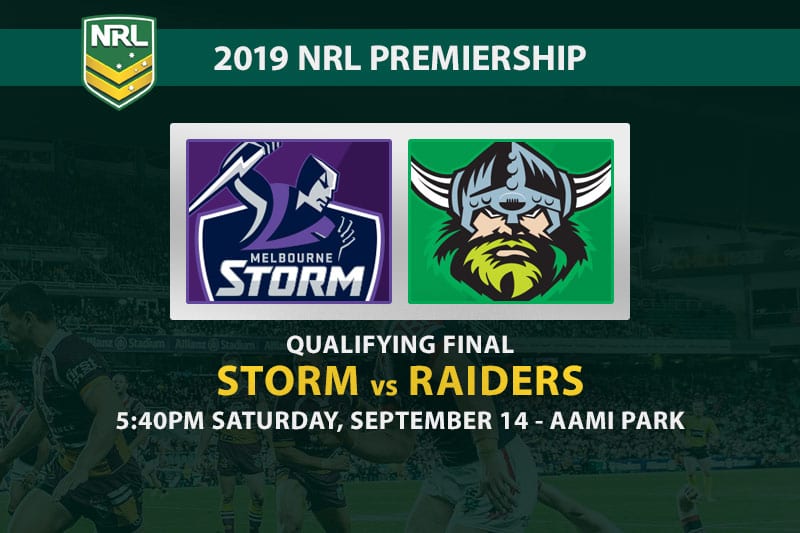 Recent history suggests Saturday’s NRL finals clash between the Melbourne Storm and the Canberra Raiders should be a belter.

It was only a few weeks ago that the Raiders announced their premiership candidacy by running down an 18-0 deficit to pinch the points at AAMI Park.

That was the last time the Storm tasted defeat during the home-and-away season, as they finished with three dominant victories to seal top spot with a 20-4 record.

Both sides rested some of their heavy hitters in the final round, so there are plenty of ins and outs for this weekend’s rematch.

With Cameron Munster and Josh Addo-Carr returning, one of Brodie Croft, Jahrome Hughes and Ryan Papenhuyzen has to make way. Croft is the unlucky one, with Hughes starting at halfback and Papenhuyzen at fullback. Sandor Earl and Harry Grant also drop out of the side, while Brandon Smith joins the bench.

Joey Leilua returns from suspension and Joe Tapine has overcome a rib injury, while John Bateman, Charnze Nicoll-Klokstad, Jordan Rapana and Iosia Soliola are back from a rest. That means six players miss out this week, although Hudson Young was never a chance after copping a lengthy ban for eye gouging.

Josh Addo-Carr – JAC has enjoyed another fine season, but one suspects he is about to kick things up a notch. With a proven track record in big games, the NSW winger is good value at $8 in Bet365’s first tryscorer market.

Charnze Nicoll-Klokstad – In the raised intensity of finals footy, Nicoll-Klokstad’s ability to run all day long could prove critical. The $3.60 for anytime tryscorer at Sportsbet is a good way to go.

Storm vs Raiders stats and trends

The Storm were undone by the Raiders’ ability to strip the ball when they last met, but Craig Bellamy and his charges are wise to that tactic now. Both teams play a defence-first brand of footy that should thrive in finals, so it comes down to which side can execute better on the big stage. Melbourne’s vast experience at this time of year will get them home.