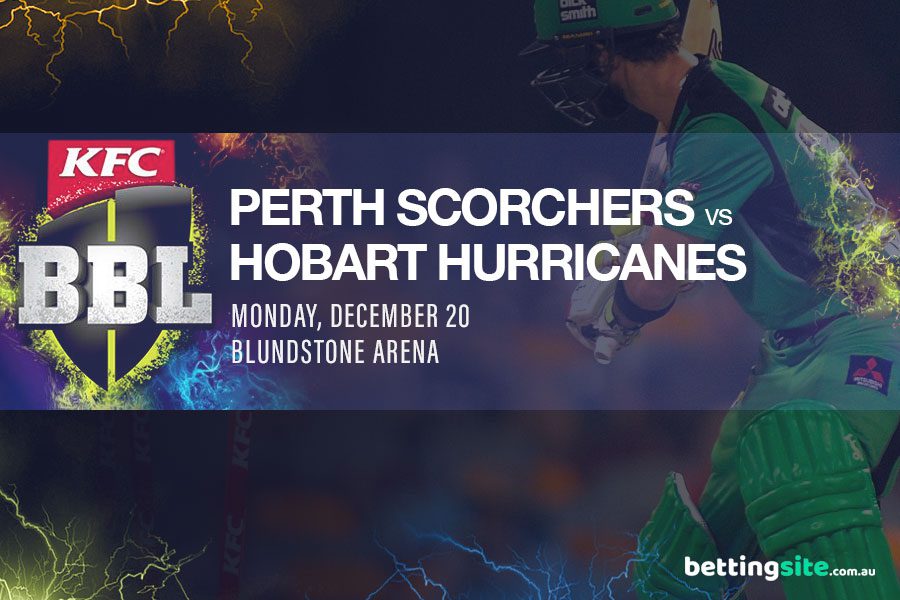 With Western Australia’s borders still heavily restricted, the undefeated Perth Scorchers are set to ‘host’ the Hobart Hurricanes at Blundstone Arena on Monday night as the 2021/22 Big Bash League season rolls on.

These two sides faced off only six days ago as the Scorchers belted the locals to the tune of 53 runs. Mitchell Marsh picked up where he left off in the T20 World Cup, belting an unbeaten 100 off 60 balls that included six fours and five sixes. He was aided by Englishman Laurie Evans, who whacked 40 off 24 balls to provide the support Marsh needed.

Having set 5/182, the Scorchers bowlers made light work of defending the total, with Tymal Mills (3/23) the standout. Ashton Agar and Andrew Tye both picked up two wickets, and considering all six bowlers picked up at least one wicket, it was a complete performance from the Scorchers.

Given they scored 2/211 against the Sydney Sixers on December 11, it was a big shock to see the Hobart Hurricanes collapse to 7/88 when chasing the Scorchers’ total the other night. When captain Matthew Wade was dismissed for four in the opening over and first drop Caleb Jewell was out three balls later, it was always going to be an uphill battle.

The Hurricanes are set to be without opening bowler Joel Paris, who picked up a mysterious injury when bowling last time out, and considering his knack of taking early wickets, he is a massive omission. Paris’ injury and the lack of a genuine fifth bowling option leaves part-timers like D’Arcy Short and Tim David there for the taking.

Online bookmakers have the Perth Scorchers as a $1.60 chance to make it four wins from as many games, whilst the Hurricanes are $2.36 outsiders.

Having been left out of the Australian Test squad in favour of Alex Carey, Josh Inglis will be looking to put together a mountain of runs in the BBL. Having made just two runs in his first match back from Australia A duty, he will be out to make amends on Monday night. He averages a tick over 32 with the bat in T20 cricket, and if the Scorchers can have him and Marsh firing, we could be set for an entertaining night. Inglis will come in at four once again, and if he is in early enough, we expect him to finish the night as the Scorchers’ leading runscorer.

Having been announced as the Nepal international captain earlier in the week, Sandeep Lamichhane will be looking to mark the occasion with an impressive performance for the Hurricanes. The leg-spinner finished with 1/32 off his four overs when these two sides last met, and if he can bowl to unsettled batsman, he has the ability to rip through a side. He averages 18 runs per wicket, and we expect a bit of a leg-spinning masterclass Lamichhane on Monday night.