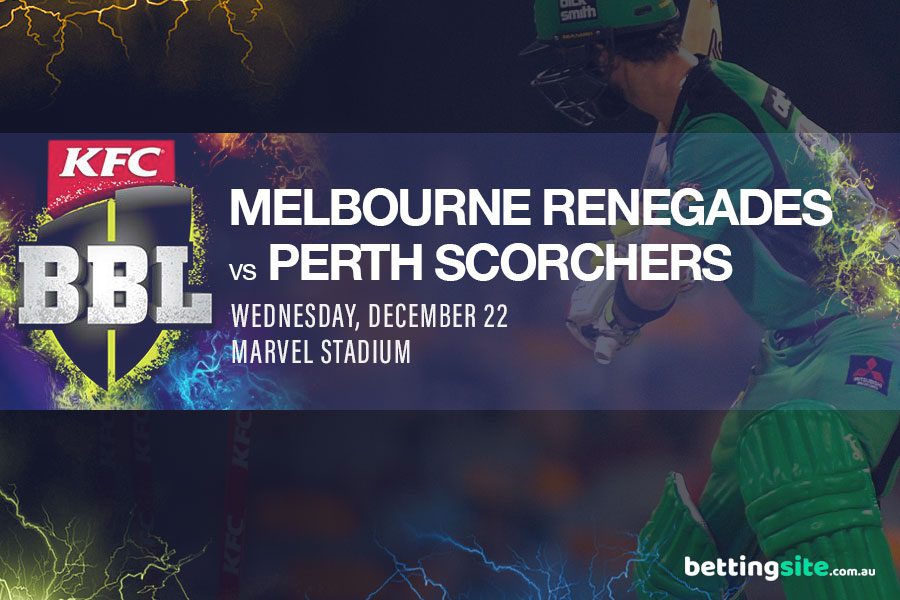 The Melbourne Renegades and Perth Scorchers are set to duke it out on Wednesday night at Marvel Stadium as the Big Bash League train rolls on.

The Renegades are coming off consecutive defeats but will be buoyed by the return of Aaron Finch from a knee injury. With Nic Maddinson returning against the Heat in their last game and now Finch back in action, the Renegades will look to lean on the pair’s international experience considering the stack of youth they have in their batting lineup.

With a bowling attack featuring the likes of Kane Richardson, Zahir Khan, Reece Topley and potentially James Pattinson, the Renegades certainly have what it takes to restrict the all-conquering Scorchers. If the Renegades can keep the likes of Josh Inglis, Mitchell Marsh and Ashton Turner quiet, then perhaps an upset is on the cards at Marvel Stadium.

The Scorchers are the only team in BBL11 yet to taste defeat, winning all four of their games in pretty convincing fashion. They have batted first in every outing so far this season, scoring more than 150 on each occasion and proving to hard to run down. In their last game, it was Kurtis Patterson who stepped up with an impressive 78 off 48 balls at the top of the order. With Colin Munro, Josh Inglis, Mitchell Marsh, Ashton Turner and Laurie Evans all at their disposal, the Scorchers are capable of just about anything against the Renegades.

The Renegades may have a star-studded bowling attack, but the Scorchers’ bowling line-up is just as damaging. The opening partnership of Jason Behrendorff and Tymal Mills is up there with the best in the BBL, whilst Andrew Tye, Ashton Agar and Peter Hatzoglou fill out a well-rounded front line. With Marsh and Turner also available to roll the arm over, few teams can match the Scorchers for bowling depth.

The top cricket bookmakers have the ‘Gades as $2.56 outsiders, with Perth pegged as $1.51 favourites as they look to make it five successive wins to begin BBL11.

Australia’s Twenty20 captain is set to play his first game in BBL11 having recovered from a knee injury. We think he is going to return in style too, with the Renegades needing a big first-up performance from their former skipper. Finch only managed a top score of 44 in the 2021 T20 World Cup, but we expect the eight-week break since that tournament will have done him a world of good. Despite his recent struggles, the hard-hitting Victorian is only 20 runs away from 10,000 runs in T20 cricket, and with the Renegades struggling throughout the opening fortnight, he looks a good bet on Wednesday at $3.30 to top score for his side.

Hatzoglou is set to face his former side for the first time since leaving Melbourne following BBL10. He has begun BBL11 with five wickets from four games, and we think he can weave his magic around some of his ex-teammates on Wednesday night. The young leg-spinner has a strike rate of 17.18 per wicket at an average of 23.27, and while we know he will go for runs, we also expect to see him snare a couple of poles along the way.