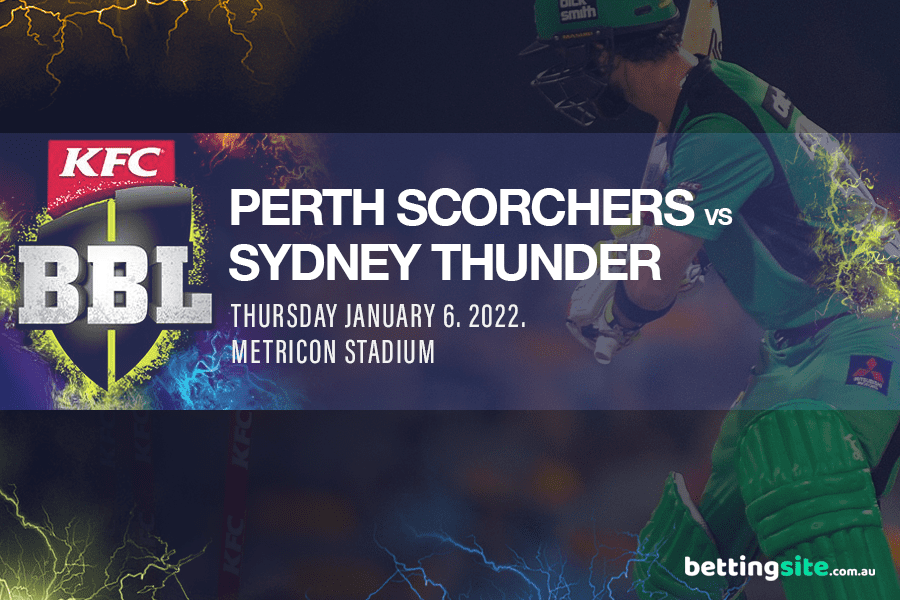 The Perth Scorchers are set to play their third game in five days when they take on the Sydney Thunder at Metricon Stadium on Thursday night.

The Scorchers are a game clear atop the Big Bash League table and will be quietly confident of toppling a Sydney side for the second time in the space of 48 hours.

Having gotten the better of the Sixers on Tuesday night in a scrappy affair, the Scorchers will be looking to use their experience of the conditions at Metricon Stadium to their advantage.

The Scorchers top order struggled with their timing, but middle order batsman Aaron Hardie managed to top score with an impressive 45 runs off 24 balls. If Perth can get more out of Cam Bancroft, Kurtis Patterson and Ashton Turner, then they should be too strong for an inconsistent Thunder bowling attack.

Despite needing to defend just 143, the Scorchers bowling attack made it look somewhat easy at stages throughout Tuesday’s chase. With Josh Philippe, James Vince and Moises Henriques all back in the hut by the end of the Powerplay, the Scorchers had themselves in a dominant spot early on. Andrew Tye (3/17) and Tymal Mills (3/29) were at their damaging best and with Lance Morris coming in and taking 2/25 of his own, there was simply no let up for the Sixers.

Following constant Covid-19 disruptions, the Sydney Thunder keep putting out strong performances with both bat and ball. Makeshift openers Matthew Gilkes (93) and Ben Cutting (34) set the perfect platform for the Thunder middle order when adding 64 runs for the first wicket. They set the languishing Strikers 172 to chase down on the back of a Gilkes masterclass, with the result never really in doubt.

Debutant Mohammad Hasnain had the BBL on notice when picking up a triple wicket maiden in his opening over sending down some absolute thunderbolts. He finished with 3/20 from his four-over spell and with Saqib Mahmood heading back to England for international duties, plenty of responsibility will fall on to the Pakistani’s shoulders, starting on Thursday night. With the loss of Mahmood, the Thunder will be needing strong performances from the likes of Daniel Sams, Chris Green and potentially Gurinder Sandhu.

Online bookmakers have the Scorchers as $1.66 favourites to build on their lead at the top of the Big Bash table, whilst the Thunder might present value at $2.23 as they look to cause somewhat of an upset.

One of the forgotten men in Australian cricket is Patterson. He has returned to the Big Bash in fine form following multiple injuries and has managed to cross 50 on four occasions so far this season. We’ll be hoping he does something similar on Thursday night on his way to top-scoring for the Scorchers. He compiled a scratchy 27 against the Sixers, but if he can see out Mohammad Hasnain with the new pill, then we think the man nicknamed ‘Spoon’ can top score for the Scorchers.

When these two sides last met, Andrew Tye got pulled from the attack by the umpires for multiple dangerous deliveries and we think the Aussie international will have a point to prove this time round. He has picked up hauls of 2/11 and 3/17 since that match and if he can continue that type of form on Thursday, he might just pick up more than the two wickets we think he will grab. Upwards of $2 is on offer for AJ Tye to pick up two wickets against a makeshift Thunder lineup and with his 50+ changeups, he should prove too tricky for this Thunder side.