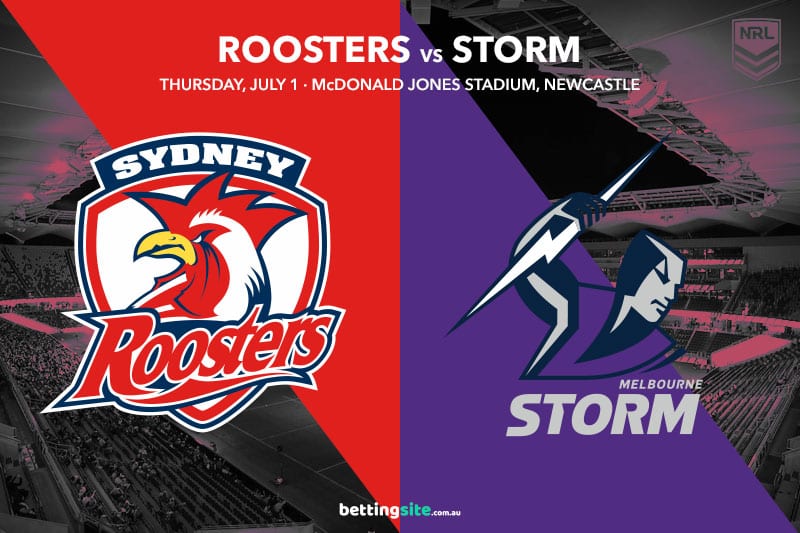 McDonald Jones Stadium in Newcastle has saved the day for the NRL, with the Round 16 Thursday night clash between the Sydney Roosters and Melbourne Storm now being played there as a result of the COVID lockdown in the Greater Sydney region.

The Storm are the hot favourites to beat a Roosters team who are punching above their weight, but with a short turnaround from Origin II, it remains to be seen how many of the Melbourne’s big guns will take the field.

The Roosters for the second straight game are at a long price, and it suddenly feels as though injuries and retirements have caught up to them.

Origin II player of the match James Tedesco will captain the Chooks, while Angus Crichton will also back up after a terrific performance on Sunday evening.

Victor Radley will also make his way into the side having served a five-game suspension and will stiffen up the middle for Sydney.

Another big boost for the Tricolours will be the return of halfback Sam Walker, who was rested in Round 15 with a shoulder problem.

The return of Victor Radley cannot be underestimated. Their attack has been fine against mediocre teams without him this year, but when he has been missing against the big guns, his presence or lack thereof is obvious. Sam Walker will be free to play his gunslinging natural style and the Storm are going to have to earn a win, meaning the +11.5 line is in play for the Roosters.

Daniel Tupou is going to get all the attention in the first tryscorer market, with many punters feeling the Storm’s only potential weakness is their defensive right edge. Adam Keighran might be a nice value pick for the Chooks to score a try; he showed he has enough creativity around the ruck close to the line against Penrith and will no doubt test the Storm.

Melbourne have scored 40 points in 66% of their games for 2021. It’s insane to see they’ve tied an NRL record with nine games remaining, but this game will be one where they won’t cross the try line with such ease. The 13+ margin at $1.91 is going to be where the punters look, and it will be hard to convince them otherwise. Eleven of their wins so far have been by 13+ points, so even if the game is close for a long period, there’s a good chance it will blow out a little towards the end.

Josh Addo-Carr has a big speed advantage marking up on Matt Ikuvalu and should be on everyone’s first tryscorer list, while Nicho Hynes should be put in multis to score at any time.

Ryan Papenhuyzen might not be ready to return from concussion, but Nicho Hynes’ form has been so good that we get an outstanding fullback matchup regardless. James Tedesco proved on the weekend that he is the best fullback New South Wales has ever had at Origin level, and he will want to prove his greatness by backing up four days later in a bid to spring a huge upset over the Storm. Hynes has just inked a healthy contract with the Sharks and has been in stellar form, and you just know he will want to prove himself against the very best the game has to offer.

The Melbourne Storm will win the game by 14 points. It will be an arm wrestle for a long period with wet weather expected, but the Storm will do enough to make the margin look more comfortable than it actually was.

This is one to get on the unders, which is rare in Melbourne games. Newcastle is a hard ground to play at in wet weather, and it particularly becomes a nightmare for kickers.

Storm at the line with Josh Addo-Carr and Daniel Tupou to both score at any time gets you $6.25 at Sportsbet.