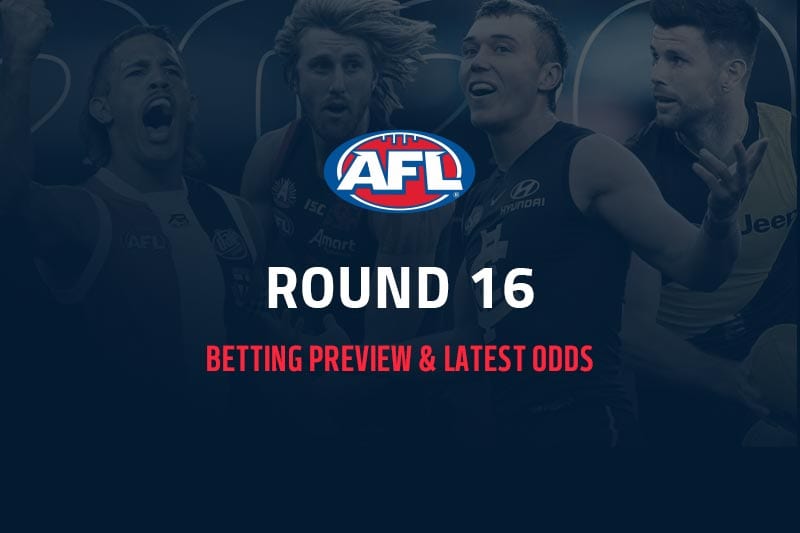 A surprising week of results has changed the landscape of the 2021 AFL Premiership season and built plenty of excitement for round 16. BettingSite takes a look at every matchup on the cards this week, as well as the latest AFL Premiership odds at Sportsbet.com.au.

Both the Gold Coast Suns and Richmond Tigers lost their round 15 matches, but the Tigers’ performance was a historical low for the famous club. The final score of 22 points against the Saints was the lowest total throughout Damian Hardwick’s 11-year coaching career. The Suns could give the Tigers a real fright if they get back David Swallow and Sam Collins in time for Thursday’s clash.

Geelong could not keep up with the Brisbane Lions in round 15, while Ben Rutten’s Bombers almost pulled off an unlikely upset over the Demons. This matchup at GMHBA Stadium would normally be an easy win for the Cats, but the Dons have been good on the road and could thrive under the Friday night lights.

The GWS Giants need to climb uphill to make the finals this year after dropping an important game to the Hawks. There is no better opposition in the AFL this season than the ladder-leading Demons, who comfortably sit a win clear of the second-placed Western Bulldogs. The Giants could bring back Stephen Coniglio and Jesse Hogan for this crucial clash at the MCG.

A powerful performance from the Brisbane Lions saw them beat the Geelong Cats by 44 points, pushing them into premiership favouritism alongside the Bulldogs and the Demons. Anything can happen when a team flies to South Australia to take on Adelaide, especially after the Crows knocked off the undefeated Demons at the Adelaide Oval back in round 10. Rory Sloane will miss the remaining eight rounds of the year after a finger injury against the Blues.

After knocking off the Swans and Giants, the Hawthorn Hawks are becoming a genuine underdog threat. Ken Hinkley’s Power have won four of their last five outings and should bring a very strong side to Marvel Stadium, but we cannot lock them in for a victory after Alastair Clarkson’s two recent miraculous upsets. Shaun Burgoyne is set to play his 400th career game against his old team.

The Fremantle Dockers can jump inside the top eight this week, but they need to defeat the revitalised Carlton Blues this Saturday night. David Teague’s men beat the Dockers by a comfortable 45 points back in round three, but winning on the road at Optus Stadium is a very difficult task. Last time these sides met in Perth the Blues pulled off a miraculous after-the-siren victory, so expect another close one.

A strong rivalry has followed the Swans and Eagles for over 15 years, but this week’s game could be one of their most important home-and-away matches to date. Both the Swans and Eagles are just hanging on inside the top eight, meaning the loser of this match could drop outside the finals later in the season. This match is scheduled at GMHBA Stadium in Geelong to avoid COVID restrictions in both WA and NSW.

Robert Harvey started his career as caretaker coach of the Magpies with a tough loss to Fremantle, and it does not get any easier for them against the in-form Saints. After smashing the Richmond Tigers in round 15, anything is possible for the Saints, even a last-minute appearance in the finals. The Pies will start as favourites since Jordan De Goey will return from suspension this Sunday.

Will Josh Bruce kick another massive bag of 10 goals when he faces the North Melbourne Kangaroos for the second time this season? It is unlikely Bruce dominates and the Bulldogs completely massacre the Roos again, as they have improved dramatically since the early-season onslaught. The Bulldogs will still start at an unbackable $1.05 with Sportsbet and should win easy.

The Tigers have blown out to $9 in the AFL Premiership betting after a disappointing loss to the Saints ($151), who are still a slim chance to make finals. Stunning wins to both the Brisbane Lions and Western Bulldogs have seen them jump into equal-favouritism with Melbourne at $5, while the Cats have moved back slightly to $5.50. The Dockers ($101) are still in the running after beating the Magpies ($251), while the GWS Giants ($67) only have themselves to blame after losing to the $1,001 Hawks.