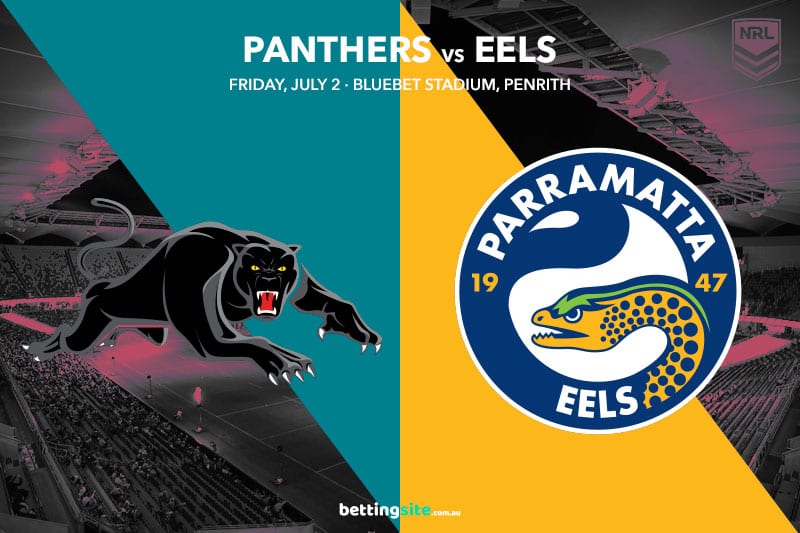 The Penrith Panthers and Parramatta Eels will put it all on the line at BlueBet Stadium on Friday evening in Round 16 of the 2021 NRL season.

A shoulder injury sustained in State of Origin II to Nathan Cleary has forced a reshuffle in Penrith’s backline, and it’s resulted in them drifting to $1.54 in the head-to-head market. Charlie Staines will move to fullback and Brent Naden will make his return to the top grade following his ill-fated 2020 NRL Grand Final appearance, while Jarome Luai and Matt Burton will be the halves combination for the foreseeable future.

Parramatta will come into the game with their first-choice side minus Reed Mahoney at hooker, so in terms of vital cogs missing for both teams, the handicap is equal. A win for the Eels would see them level the Panthers on 26 competition points and open up a genuine race for a home final in week one, while a loss would give Penrith a four-point gap, meaning there are huge end-of-season implications.

The injury to Nathan Cleary has seen the Penrith Panthers drift in the head-to-head market, but their premiership odds of $3.25 have remained the same while the severity of the injury is determined. The line is just -5.5 for Penrith this week; usually they are good things to cover no matter how long it gets, but this game might be one to put the brakes on.

Charlie Staines’ move to fullback has changed his first tryscorer price, blowing out to $15 from his usual single-figure mark. Brian To’o is the $8.50 favourite to cross the line first on Friday night, and you know Penrith will have watched Souths’ demolition of Parramatta’s right edge a few weeks back, so back the Samoan tank on the flank. Stephen Crichton is back in his familiar role at left-centre, so punters should be rushing to get a piece of the $2.40 for him to score at any time.

The Parramatta Eels in the last 18 months have struggled mightily against teams above them on the ladder and were smashed in the 2020 finals series in consecutive weeks to exit in weak fashion. They may have won their last three games against bottom-eight sides, but before that they were embarrassed in consecutive weeks by the Rabbitohs and the Sea Eagles.

With Cleary out for Penrith, the Eels won’t get a better chance to take down a top-two side, but do they believe in themselves? The $2.52 price suggests the punters are a bit sketchy on them, but they have covered the line in seven of their last eight away games, so perhaps there is a win to be had.

Maika Sivo is the $1.82 favourite in the anytime tryscorer market, but how about the $4 for Isaiah Papali’i? He has been one of the best for Parramatta every week and already has six tries in season 2021.

While Nathan Cleary might be missing due to a shoulder injury, Mitchell Moses will never get a better opportunity to make an impression and force his way into the vacated New South Wales halfback jersey. Jarome Luai is the best five-eighth on form in the competition, but will his role within the team change as he moves into the no.7 jersey? One feels that if Moses is able to lead Parramatta to a victory against an outstanding team, or at least produce a fantastic display in a gripping contest, the jersey will be his and he will partner Luai in Game III. It’s rare that a regular-season game in July can alter a player’s career so dramatically, but if Moses stars on Friday night, his rugby league journey completely changes.

Penrith should get the all-important two points, but it is going to be a close contest without Nathan Cleary. Parramatta at the +5.5 line looks to be the safer option when there is still some unknown surrounding how Cleary’s absence affects the Panthers.

Parramatta at the line with Stephen Crichton and Isaiah Papali’i to score at any time pays a tidy $18.25 with Sportsbet.