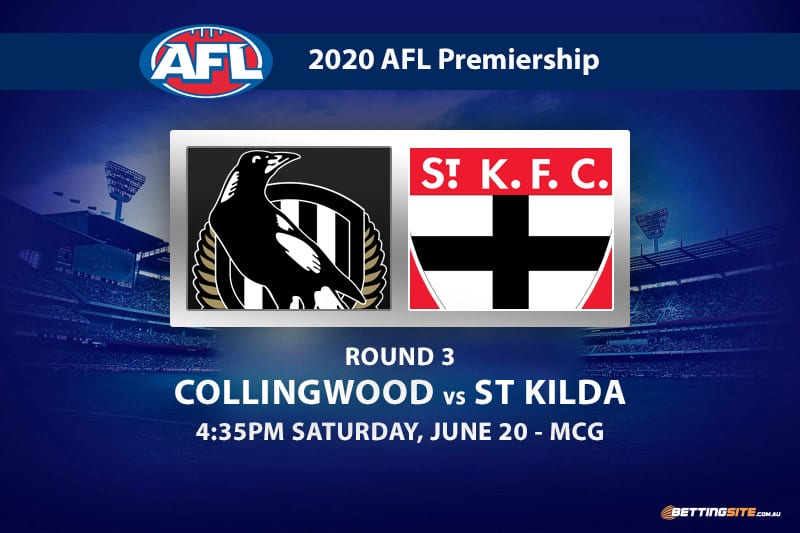 Can the energised St Kilda Saints make a statement against the Collingwood Magpies at the MCG this Saturday afternoon?

Some of the big talking points for this clash will be made during selection, as Nathan Buckley and the Pies have plenty of issues in the forward half.

Jaidyn Stephenson sat out last Thursday’s draw with Richmond, but Collingwood may look to his unpredictability, athleticism and forward craft in a bid to liven up the team’s attack.

Adam Treloar is expected to miss another week as his calf continues to heal, while St Kilda captain Jarryn Geary is out after suffering a hamstring strain in the Saints’ win over the Western Bulldogs.

Both teams had an easy time against the Bulldogs when transitioning from defence to attack, but St Kilda may need to up the ante against Collingwood’s all-star back six.

Only one player in the league found the footy 30 times in round two, and that was Scott Pendlebury. It appears the lockdown period did no harm to the classy midfielder’s fitness, as he looked as sharp as ever against the Tigers. We suspect the 2010 premiership star will have a day out against the Saints and their relatively inexperienced midfield.

A move from the forward pocket to the half-forward flank worked well for Gresham, but now he’s getting even more time up the ground. It is hard to get 20 touches with the shortened game time, but that mark is more than achievable for a player whose elite fitness and good timing see him on the end of plenty of handballs.

Last time these teams met, Brody Mihocek kicked four goals for the Magpies. Nathan Buckley will demand more from the mobile forward after his forgettable performance against the Tigers. The St Kilda back six is still coming together with Dougal Howard and Callum Wilkie finding their groove, which might allow a player like Mihocek to go under the radar and kick a couple of goals.

We mentioned Mihocek kicked four goals for the Magpies when these teams last met, but Tim Membrey also kicked four goals on the same night. The former Swan has a new role to play alongside Max King inside 50, meaning he is targeted less by his midfielders, but Membrey is a smart forward that makes the most of his opportunities.

In our eyes, the bookies have overreacted to the low-scoring draw last Thursday night. Even though the Pies only put up 36 points for the night, they still scored 25 in the first quarter. The Saints also score in waves, meaning any momentum could lead to a bunch of goals either way.

Collingwood to win by 1-39 points

The draw with Richmond far from memorable, but we know this Collingwood team is better than that. If the Pies can fit Jaidyn Stephenson into the squad and fix their forward half, they should have enough quality to beat a St Kilda side that is still putting all the pieces together.