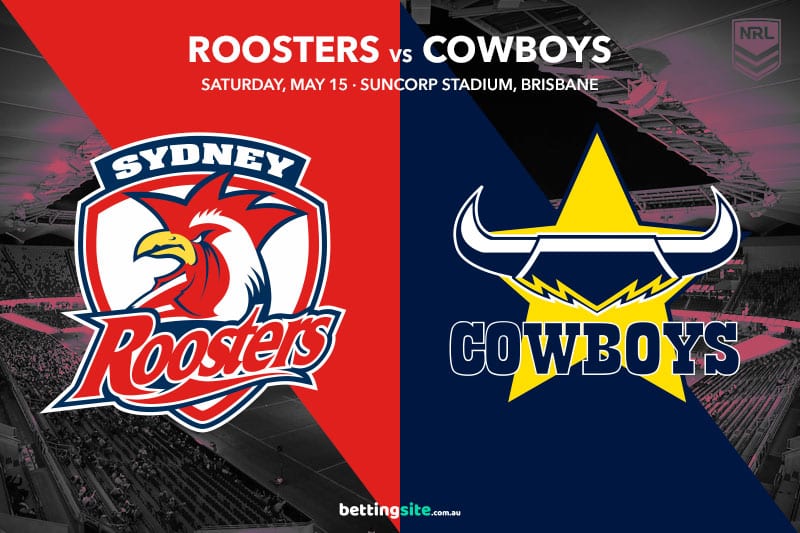 The Sydney Roosters may be battered and bruised as they navigate an almighty injury toll, but they are still expected to get the win over an improving North Queensland Cowboys side when they head to Suncorp Stadium to play in Saturday’s main event of NRL Magic Round. Lachlan Lam will return from a knee injury to partner Sam Walker, while Victor Radley appears every chance to recover from a head knock in time to take his place in the starting forward pack. The Cowboys have won four of their past five games and come in at the long price of $4.20, but this game should be a lot closer than the head-to-head prices indicate.

Let’s take a minute to appreciate the star power missing from the Roosters team this weekend and the fact they are still at the $1.28 price. It’s a remarkable tribute to their depth and to Trent Robinson as a coach, but respect and courage isn’t going to be enough to get them the two points.

The Chooks have three players in single figures in the first tryscorer market – James Tedesco, Daniel Tupou and Matt Ikuvalu – but the two value picks are the back rowers Angus Crichton and Sitili Tupouiniua, who will be running at weak edge defenders from the Cowboys in Scott Drinkwater and Jake Clifford. Many punters might think the Sydney 13+ margin is a fait accompli, but after a brutal contest against Parramatta which left them with more injury concerns, it could be a contest where the Tricolours are a bit flat, which makes the 1-12 margin at $3.30 appealing.

The North Queensland Cowboys may be facing an undermanned Roosters side, but it is a big test to see if their turnaround has been real or if they’ve just managed to get some wins over weak opposition. The line has shifted out to +12.5, and that does have some appeal when you consider the tough game the Roosters had last week. Also, the Cowboys will have good support at Suncorp Stadium on Saturday night.

Kyle ‘The Octopus’ Feldt is the $2.20 favourite to score a try at any time, and almost every North Queensland fan will have him as a selection in their same-game multi. Reece Robson at $8.50 offers sensational value to get on the board, given he has proven his try-sneaking abilities already in 2021.

When these teams met in the 2017 preliminary finals, Jared Waerea-Hargreaves declared he would be the one to stop a rampaging Jason Taumalolo. He then proceeded to play the worst game of his career as Taumalolo led the Cowboys to the NRL Grand Final. The point being: when these two sides play, it’s these big units in the middle who lead the way.

Taumalolo was back to his best against the Broncos when playing longer minutes, while Waerea-Hargreaves played 65 minutes straight against Parramatta and was exceptional. Two of the game’s best big boppers in front of a big Magic Round crowd should have fans hooting and hollering.

The Roosters will win by 1-12 points, giving punters a nice boost to their Saturday night kitty. The Cowboys will give a good account of themselves, but they’ll leak too many points out wide.

Roosters 1-12 with Kyle Feldt and Sitili Tupouniua to score at any time fetches a $25.25 price at Sportsbet. Load up!