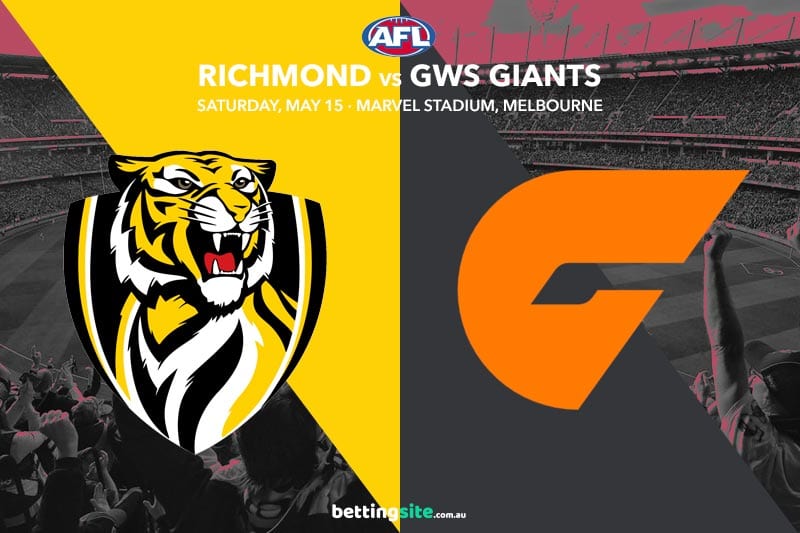 The Richmond Tigers and GWS Giants will clash at Marvel Stadium for the first time this Saturday in round nine of the 2021 AFL Premiership season.

Damian Hardwick’s Tigers must bounce back this week after losing to Geelong by 63 points in round eight, but it will not be easy considering their injury-riddled midfield.

Shane Edwards (ankle) and Shai Bolton (wrist) will join Dion Prestia, Trent Cotchin, Kane Lambert and Ivan Soldo on the sidelines this week, while Dylan Grimes still has to pass a fitness test to return from concussion.

GWS coach Leon Cameron is confident Jesse Hogan will return from a tight calf after missing last week against the Bombers, allowing him to replace the suspended Jeremy Finlayson. The Giants have lost Lachie Keeffe to an ACL injury and may rest Shane Mumford after a couple of consecutive games.

The Giants have won four of their last five games and are pushing their way into the top eight, but they have never beaten the Tigers on the road. The home side has won the past 11 contests between these two sides, which has us leaning towards Richmond this Saturday night.

A majority of the recent matches between Richmond and GWS have gone under the total points line, including each of their last three clashes. The Tigers have not scored well in their last three outings, but they were defending brilliantly until last week’s loss. The Giants have struggled to kick goals in their last three encounters with Richmond, so a low-scoring game is on the cards.

Richmond will need to rely on Dustin Martin out of the middle this week more than ever before, as he is the only star midfielder still standing. The Giants are powerful out of the guts, led by the emerging Tim Taranto this season.

Both Martin and Taranto love pushing forward and kicking a goal, while their strength out of the contest sets them apart from the rest. You can find great value for both midfielders in the disposal and goalscorer markets for Saturday’s clash.

Richmond to win by 1-24 points

Although the Tigers have only won two of their last five matches, we think they will knock off the Giants at Marvel Stadium this weekend. Leon Cameron has never coached GWS to an away win over Richmond, but the Giants should keep the margin within four goals.

Tim Taranto to get 30+ disposals

With an average of 31 disposals from his last six matches, Tim Taranto has been exceptional for the Giants. Taranto collected 30 or more disposals in all of his last three full-length matches against Richmond, and we think he can do it again this Saturday. Considering the Tigers must utilise their midfield depth this week, Taranto should dominate over the less experienced opposition.

Dylan Grimes should return this week and strengthen Richmond’s defence, which will help keep the total match points to a minimum. Tim Taranto will star for the Giants, but the Tigers will get up in a close one.